Shevon said it broke her heart seeing her partner Soon Huat struggling to stand in court but they promised to finish the match together. 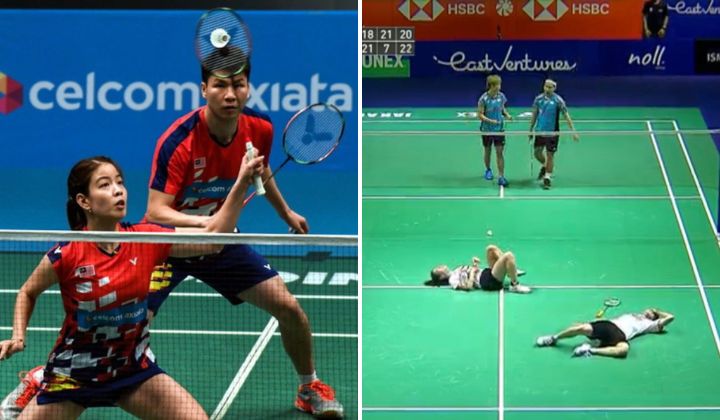 Malaysian doubles team Goh Soon Huat and Shevon Lai made the nation proud due to their grit during the first round of EAST VENTURES Indonesia Open 2022.

The world No 14 mixed doubles pair, who crashed out in the first round of the Indonesia Masters last week due to food poisoning, defeated world No 1 Dechapol Puavaranukroh and Sapsiree Taerattanachai yesterday.

Despite still feeling the after-effects of food poisoning, Goh and Lai upset the Thai heavyweights 21-18, 7-21, 22-20 in a 69-minute battle, New Straits Times reported.

Today, we proved that we do not come up with excuses, no matter the situation. We gave our best, and we finished the match. Just because we are not national players, it does not mean we will make excuses when we lose.

“it’s just a badminton match. why are you crying??”

New Straits Times reported that several badminton athletes housed at the same hotel suffered bouts of food poisoning due to the unhygienic conditions of the hotel.

Players alleged that there were cockroaches in the rooms and dining areas. The untenable living conditions made many athletes from Thailand, Hong Kong, South Korea and even Indonesia to seek better accommodations elsewhere.

Goh and Lai moved out of the hotel too. However, Goh had diarrhoea and vomiting, and could barely stand in court in between points towards the end of the match.

According to BWF World Tour, Goh was experiencing on and off chills and fever. He recovered for a day or two but the symptoms came back again. Despite not feeling a hundred per cent, he started training a day earlier.

“Actually, it broke my heart a lot because I know how much it was hurting him. He was shivering throughout the third game. I felt so much pain and I wanted to help him so much, but in doubles it takes two to win. I was really worried for him. And he kept telling me that it’s okay, I want to continue, I want to finish the match. That’s Soon Huat.

Lai told him that she would support him all the way and try to cover for him as much as she could to finish the match together.

Goh and Lai will face Malaysian compatriots Hoo Pang Ron-Toh Ee Wei for a place in the quarter-finals next.