JKOAK claimed that the hydro dam project will flood their homes, neighbourhoods, and the forest that has been home to their ancestors. 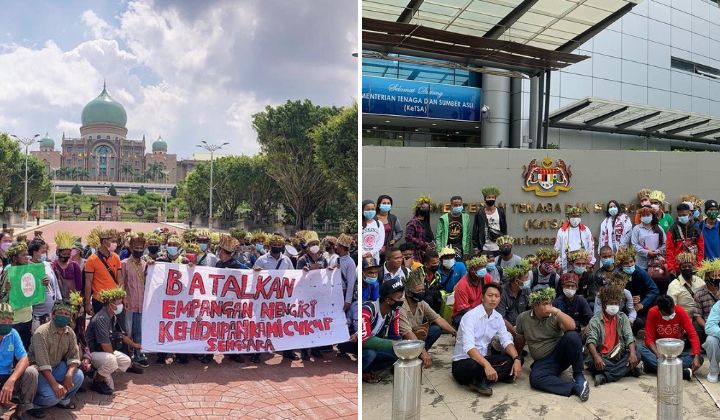 Hundreds of Orang Asli from 17 states in Gua Musang, Kelantan, demonstrated in front of the Prime Minister’s Office Complex at Putrajaya on Tuesday, 7 June.

The group, known as Jaringan Kampung Orang Asli Kelantan (JKOAK), protested the building of the RM5 billion Nenggiri hydroelectric dam that would flood their kampung and the forests.

In their memorandum, the group stated that the hydro dam would flood 5,384 hectares of the forest that has been their ancestral land for years.

The Malay Mail reported that the group marched in their traditional headgear made from woven leaves and flowers as they sang songs and held up hand-drawn banners, urging the government to cancel the dam project.

We ask the state and local governments, and Tenaga Nasional to cancel this project because it won’t solve the flood, drought, and electricity supply issues that the dam is intended to. We also want the relevant authorities to stop all logging and mining activities related to it because they are the main causes for floods and droughts in our state.

Mustafa Along, chairman of Jaringan Kampung Orang Asli Kelantan and the organiser of today’s demonstration.

He also claimed that Orang Asli has not benefited from the proposed hydroelectric dam project despite promises given by the government in the past.

Members of their community also shared their worries about losing their customary way of life, such as foraging and hunting in the rainforests that have been home to their ancestors.

While 1,185 people from 217 families will be moved to Kampung Kuala Yai, 18 other kampung or pos would lose their lands forever in the flood.

The group managed to hand over their memorandum to a representative from the prime minister’s office and the political secretary of the Ministry of Energy and Natural Resources Syahir Sulaiman.

They ended the demonstration in front of the Tenaga Nasional Berhad (TNB) office in Kuala Lumpur.

JKOAK urge the government to find alternative solutions that will cause less damage such as building smaller hydro dams in several areas such as Machang, Tanah Merah and Pasir Mas to manage floods and drought seasons, as suggested by the Department of Irrigation and Drainage (JPS).

They also urge the government and TNB to choose other energy sources that are much more environmentally friendly rather than destroying nature.

What is the Nenggiri hydroelectric dam?

TNB is building the Nenggiri Gua Musang Dam in Kelantan to offer a multitude of benefits to the residents in the State such as mitigating floods, creating employment opportunities as well as new economic opportunities in its main reservoir lake.

According to Business Today, the project is expected to operate in 2026. TNB CEO Datuk Ir. Baharin Din said the dam will collect a large amount of water in the main reservoir lake before it gets released in a controlled manner into the Nenggiri River.