The driver murmured in pain but was mistaken for being drunk and help came a little too late. 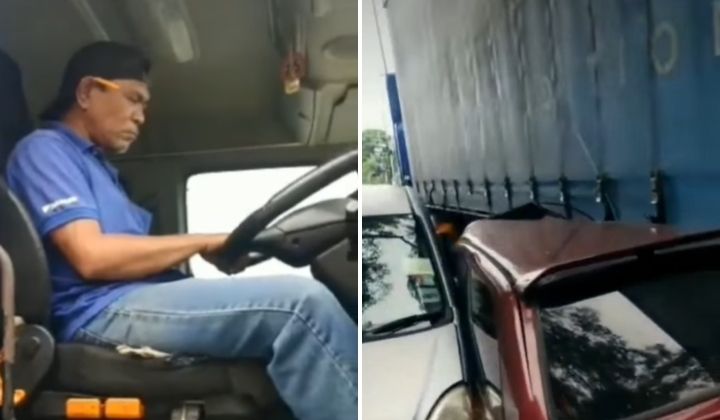 Recently, a viral message circulated on Whatsapp showing a lorry driver who was allegedly drunk behind the wheel.

It turns out that the message is false and a misinterpretation of a road accident that happened on Monday, 3 January 2022.

The lorry driver suffered a heart attack behind the wheel and crashed into a few cars along the road at Jalan BRP 8/2, Sungai Buloh near the Daikin factory.

A woman in a video that has gone viral could be heard asking the driver if he was drunk.

The driver murmured and the woman mistook it as a sign that he was incoherent due to intoxication.

Unknown to the woman at the time, the driver was in pain due to a heart attack.

Instead of calling for help, the woman showed the damage sustained by the other vehicles on the road and told the others that the driver was drunk.

Police confirm it was a heart attack

According to a police statement, the man died due to myocardial infarction.

The police also advised the public not to form speculations with respect for the victim’s family.

A friend of the lorry driver also made a video to say that his friend wasn’t drunk driving and had a heart attack instead while on duty.

Netizens were saddened to hear the news and sent prayers and condolences to the family.

A few asked the family to sue the woman for spreading false information and tarnishing the lorry driver’s reputation.

Among all the angry rhetoric, a netizen advised the woman in question to apologise to the victim’s family for making false accusations.

This incident definitely reminded many of us that we shouldn’t immediately jump to conclusions and to offer help first.