Rewcastle Brown was puzzled that the ‘wanted poster’ was issued when the police could have called her. 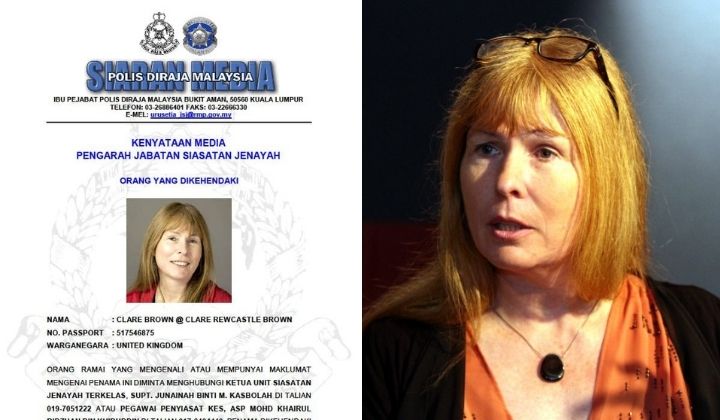 The police have issued a ‘wanted poster’ for Sarawak Report editor Clare Rewcastle Brown, following an arrest warrant that was issued against her in September.

As reported by The Vibes, Rewcastle Brown has told Free Malaysia Today that the police could have contacted her instead of issuing the ‘poster.’

She also said the police had messaged her in the past and they could easily call her to ask for her location.

According to Malaysiakini, Rewcastle Brown was charged in absentia at the court under Section 500 of the Penal Code for allegedly defaming Sultanah Nur Zahirah of Terengganu in her book “The Sarawak Report – The inside story of 1MDB.”

The arrest warrant was issued because Rewcastle Brown failed to appear in court that day.

In a report by The Vibes, Sultanah Nur Zahirah is of the impression that the contents of the book would make it seem that she interfered in the state administration and used her influence to establish a sovereign wealth fund, which later became 1Malaysia Development Bhd.

Rewcastle Brown has since responded by laying out her plans and movements. She’ll be moderating a seminar regarding the “timber mafia” on Monday at the University of Strathclyde in Glasgow, UK, which will also be available online.

On 21 November, she’ll be attending a press freedom conference in London and another event at the UK Parliament the following week where she’ll be discussing press freedom.

She added that she’ll mention the arrest warrant against her at these events.