From various women who died during childbirth to males covered in black oil, we Malaysians sure have lots of scarier ghosts than the western ones. 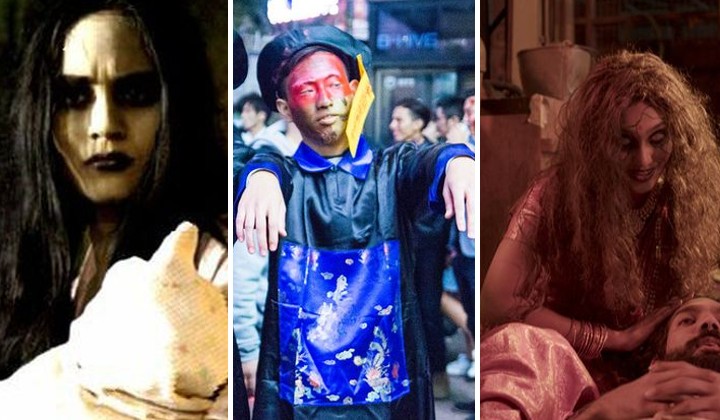 Since it’s Halloween, there are lots of talks about ghosts, right? But the ones shown during Halloween are just Western ones. If you grew up in Malaysia, you’ll have heard about our ghosts and ghouls too.

To be honest, we think Malaysian ghosts are way way scarier than Western ones, no offense. There’s something about Asians that are so scary…

So to fight their Chucky or Valak, we have our own Kak Ponti and Jiangshi to scare us senseless. The question is, how many of these Malaysian terrifying ghosts do you recognize?

P/S: This article doesn’t really have much real pictures because the writer is terribly scared looking at the pictures while writing this. She gets easily spooked. 🙁

Here are some of the Malaysian ghosts you may or may not know roaming around rent-free in our country:

We actually share this ghost with our Indonesian peeps. Pocong, Hantu Bungkus or the Shroud Ghost is a jumping ghost trapped in a long white shroud (kain kafan) used to wrap Muslim bodies in a burial.

The dead body is then tied with a few strings above the head, along the body and by the feet. These strings are tied so that people can manage the dead body better before they are buried. Once they’re in the ground, these strings should be untied.

This is where it gets interesting. According to myths, if the strings are not untied after 40 days, the body is said to jump out of the grave and harass anyone in its way, demanding to be freed.

Pocongs usually move by jumping as the knot on their feet restricts their movements. They can jump as high as 50 metres if they’re feeling a bit athletic. Some sources also say that they can float or teleport from one place to another.

READ MORE: We Went To The Nights Of Fright 8 At Sunway Lagoon – Were We Spooked?

Mohini is popular among the Indian community. She is said to be a beautiful female ghost who killed herself without experiencing physical pleasure or finding a romantic partner before. She then returns as a vengeful spirit and seduces yummy bachelors to fulfil her physical needs until they die. Uh… that’s some rough love right there.

Well, she’s not called the goddess of enchantment for nothing, right?

Mohini is said to have long black hair and is dressed in a white sari. She can entice a man with her beautiful charm or tempt him with food she prepares by setting her legs on fire and cooking them. Hey, a way to a man’s heart is through his stomach, right?

Jiangshi is a hopping vampire popular in Chinese legends and folklore. Dressed in a Chinese shroud (often associated with the Qing Dynasty official garments), it moves around by hopping with its arms outstretched.

They are said to come out at night, killing living creatures. No, they don’t devour blood or brains, they devour people’s qi or life force. The word jiangshi itself means stiff corpse. Due to rigor mortis, the stiff bodies can only move by hopping.

A popular way to stop this monster in its tracks is to paste a Taoist symbol on its forehead. As long as the symbol is held against its head, the jiangshi won’t be able to move. Another less scary way that doesn’t require a face-to-face encounter is to hold up a mirror facing them. Yes, apparently they are scared of their own reflections.

Toyol is mostly described as a baby or toddler spirit acting on the instruction of its master. People could keep this spirit and train them to steal valuables from their targets.

Because they are so small (measuring around 15 centimetres), they are skilled at doing petty or minor crimes like stealing money or jewellery from cupboards and tight spaces. Toyol is said to be the corpse of a baby that’s brought back to life with black magic. They look like a mummified baby with green or black skin, bulbous heads, pointed ears, piercing red eyes and sharp teeth.

People who own a toyol would have to treat it exactly like a child by feeding it milk, sweet candies and also a prick of their blood from their thumbs. If they do not give their own blood, the toyol will proceed to suck the toes of the owner or the people closest to them to satisfy their hunger. Talk about having a foot fetish…

Nu Gui literally means female ghost in Mandarin. It is said the female ghost was wrongfully treated when she was still alive. Some say she died of suicide after being abused by men. After death, she became a vengeful spirit that vows to seek justice and revenge on her perpetrators.

Like all-female ghosts, Nu Gui is said to have an eerie long black hair and she wears a white dress. Nu Gui can also be seen in red dresses as well. Folklore suggests that the odds of the dying female becoming a Nu Gui are greater if she dies wearing a red dress. Then, she’d be called the Hong Yi Nü Gui or red clothes female ghost.

So guys, watch out, this ghost is going to come after you due to some bad trauma. It’s also said that because she is abused by men, she’ll hunt and kill men but only scare women. That’s what we call sisterhood. 🤝🏼

Pontianak is perhaps the most popular ghost of them all in Malaysia. They’re called Kuntilanak in Indonesia. Pontianak is a vampiric ghost, said to be the spirit of a woman who died while pregnant or during childbirth.

She attacks mostly men but welcomes other prey too if she feels like it. She loves to steal babies too because hey, the lady didn’t get to hold her baby when she was alive. Give her a chance.

Legends have it that if you suddenly smell something fragrant like plumeria flowers, or hear a crying baby or a dog whining, she’s near. It’s a bonus if you hear her famous laugh too. If the laugh is loud, it means that she’s far but if the laugh is suddenly quiet and slow, she’s right behind you. RUN!

Pontianaks are terrifying beings with frizzy long hair, long nails, bloodshot eyes and blood-smeared white dresses. But once you hammer a long nail at the back of their necks, they transform into a beautiful and polite lady. Try pulling the nail out and you can witness a real-life transformation right in front of you. 🙂

This ghost is a bit peculiar but the weirder, the better, right?

Also called Naru Susu in the Dusun language, this ghost is created by Malaysian folks to scare their children and to stop them from playing outside at dusk. The true origin of this ghost remains a mystery but the story behind it is interesting.

This ghost is called the ‘boob ghost’ because it has long elongated breasts. Yes, you heard that right. Breasts. It is said that this ghost would hunt for children and trap them under her breasts, to hide them from their parents. The trapped kid may see other kids around him but the others cannot seem to find him as he’s invisible, under the bosom of the ghost.

The ghost would also disguise herself as a big-chested lady to lure young boys to come to her. It’s all about tactics, guys. She’s a cunning hustler.

Penanggal or Penanggalan is a flying head with hanging internal organs. It’s called Balan-balan in Sabah but people strongly advise not to say the word out loud as it’ll summon the vampire. Talk about Voldermort-ish.

Penanggal is also said to be a woman who also died during childbirth (there are so many other tragic ways to die though) with her head severed from her body. Another source says that penanggal is actually a living woman, just practising black magic to chase beauty and youth.

Penanggal has an affinity towards pregnant ladies and babies and will hunt for their meat and blood. When she hunts during nighttime, she detaches the head with a few of her entrails and floats around the village, creeping under kampung house floorboards and using her long tongue to lick the blood of women in labour during the night.

One way to notice its presence is by smelling vinegar. Penanggal is said to dip its internal organs in a jar of vinegar so they could shrink and fit back into its body before sunrise. The floating head is also described as looking like a flaming fireball or a will-o’-the-wisp from afar. You might wanna run when you see a flying ball of flame coming towards you.

Orang Minyak or ‘oily man’ is a supernatural being with a naked male human body that’s covered in black oil. It targets virgin women at night. Some people also believe it’s just a real-life man who’s practising black magic. The oily surface is said to aid the man to avoid being captured easily (although if you think about it, he’ll slip and trip a lot…).

According to folklore, Orang Minyak struck a deal with the devil to achieve supernatural powers by raping several virgins (some say 21 some say 40) within seven days. Women in rural areas are terribly scared of them and some even pretended to wear men’s clothes to act as if they’re already married and living with a man.

This ghost or spirit is a bit more unique. It’s in the form of a small animal, usually a grasshopper or a cricket. A scary-looking black magic grasshopper. Yes, we Malaysians are so creative when it comes to envy and jealousy, aren’t we?

Pelesit is a spirit in the form of a small animal and is made using black magic from the tongue of a dead child. After some incantations and magic, this tongue will transform into a small harmless creature, ready to take orders from its master (usually a female shaman).

It’s usually sent to invade other people’s homes and send poison or mysterious diseases until the other person falls ill. It’s like a miniature animal spy you see in sci-fi movies.

Pelesit is also what you call a saka, a ghost that needs to be passed down from one generation to another. If it doesn’t have an owner (the family doesn’t want it), it’ll wreak havoc on the whole village.

So these are some of the Malaysian ghosts that are roaming Malaysia’s empty homes or lonely streets at night time. We have several others too like the Langsuir, Jerangkung, Banana Tree Ghost and more but let’s elaborate on those another time.

Do you have any more Malaysian ghosts that we don’t know about? List them out in the comments and maybe we’ll do a part two soon!