Kolam or Rangoli are beautiful patterns decorated with rice, sand, or grains on the entrance floors of Indian households or buildings. 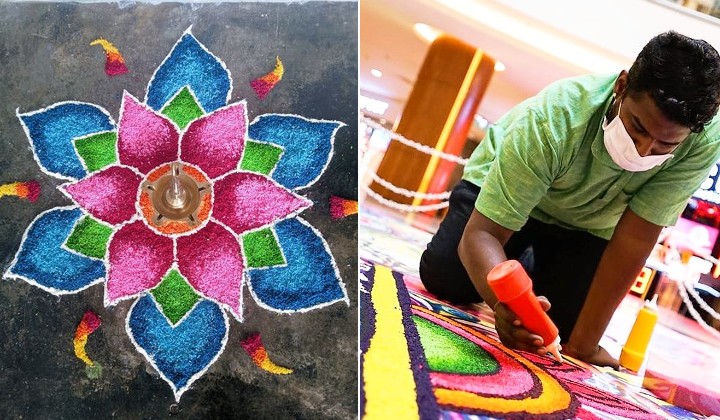 Kolam (in Tamil Nadu) is an art form that originated in the Indian subcontinent, which means beauty.

Rangoli comes from the Sanskrit word ‘Rangavalli‘, which means a creative expression of art through the use of colour.

Both of them mean the same thing, a colourful pattern, the difference is just where they originate and how they are done.

Kolam is usually done at the entrance of the houses, serving as a gesture to welcome the gods that bring good luck. Hindus believe that the Kolam welcomes Lakshmi, the Goddess of Fortune or Prosperity. It is also said that if someone doesn’t have the Kolam, it could bring bad luck.

Usually done during festivities such as Deepavali, Ponggal, Onam and several others, Kolam is a harbinger of good fortune.

Apart from bringing in auspiciousness, a sign of good luck, a type of exercise and a form of artwork, Kolam is also a sign of generosity. The materials used for it feeds ants, squirrels, smaller birds and other tiny animals.

Hindus use these organic materials on their Kolam – as a way to create a harmonious way of living with nature. For the basic Kolam, if the drawings get eaten, walked on, washed out or blown away by the wind, new ones are made the next day.

If not for festivities, Kolam is generally done by women in the household after they’ve cleaned up the front of their house. Traditionally, the postures needed to make a Kolam are a kind of exercise for women to straighten their spines, sorta like yoga (killing two birds with one stone).

Generally done by women and their daughters, the designs of Kolam are passed from generation to generation and nowadays, men can also dive into the art as a family bonding session or even a professional job.

Take Ruben Prakash for example, a professional Kolam/Rangoli artist based in Malaysia. He’s been doing Kolam since he was 15 and is now doing it for big events in malls, parties or weddings. His works of art that get featured in malls are usually big and intricate ones, which took him a few days to create at night, along with his staff.

The evolution of Kolam

A Kolam or Rangoli has different designs and ways to do it. Rangoli is more of a free-flowing art while Kolam is a bit more technical and symmetrical.

For a Kolam, you have to start with dots, and then progress to connect the dots symmetrically, with lines, loops and gestures.

The designs for Kolam and Rangoli can range from floral and geometrical designs to deity impressions or animal shapes. It can be more elaborate given there’s lots of time and manpower to prepare it.

As time passed, the art of Kolam evolved as not everyone has time to do it from scratch. Traditional Kolam involves great creativity and patience while contemporary ones simplify it and get the job done fast.

Some people can also paint their Kolam and that would last a couple of months or even years.

But nowadays, there’s also a sticker Kolam where you can just peel off the back label and stick it on their floor entrance. Quick and easy, but a little untraditional.

No matter how or why people make Rangoli or Kolam, one thing is for sure, they look so pretty! Which one of these patterns do you like?

READ MORE: Did You Know April Is A Pretty Big Deal For Malaysian Indians?