It’s the only place in Australia where Hari Raya Haji and Hari Raya Aidilfitri are public holidays. 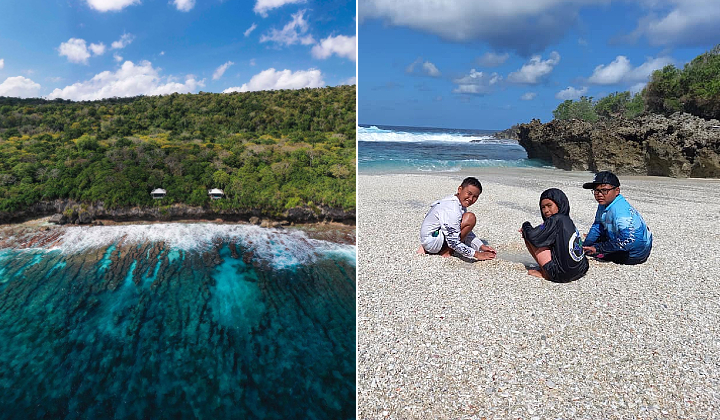 Who would’ve thought a tiny island on the Indian Ocean, about 1600 kilometers off Australia, would house a sizeable population of Malays?

The tropical rocky speck known as Christmas Island is unlike most of Australia.

Of the 1692 people on Christmas Island, 16.1% of the population are of Malay descent. Malay is the second most spoken language on the island after English.

It’s the only place in Australia where Hari Raya Haji and Hari Raya Aidilfitri are public holidays. The island also has a heritage-listed Malay precinct known as the Malay Kampong, at Jalan Pantai.

While Jalan Pantai might sound like the name of a street you’ll find at the taman next to yours, the Malay Kampong at Jalan Pantai, Christmas Island comprises of a mosque, a Malay school, a Malay club, a Muslim-owned mart and an Islamic cemetery.

How they wound up on Christmas Island

The desolate island was given the name Christmas Island in 1643, but settlement didn’t start until British surveyors found phosphate resources in 1886.

After colonising the island in 1888, Britain granted a 99-year lease to the Christmas Island Phosphate Company.

Living through abject inequality for years, it was not until the 1980s that a concerted effort to organise and demand fairer wages led to change.

The British Phosphate Commissioners (BPC) only paid Asian workers a fifth of what white workers received and had the power to terminate employees without cause or a hearing.

Within twenty-four hours, the authorities deported sacked employees, stamping their passports with NTR – “Never to Return.”

Housing, transportation, and the educational system on the island were all heavily segregated.

Asian families lived in flats with little to no fittings, whereas White families resided in homes constructed to Australian standards.

The Union of Christmas Island Workers, headed by a Malaysian president, finally won all industrial demands including wage parity in 1981.

What the future holds

Today, the younger generation of Malays who reside on the island have big goals and aspirations for a brighter future.

Malay girls, in particular, are leading the charge. A lot of them are academically-driven and go on to pursue higher education in universities on the mainland.

Due to the rich history of migration from Malaysia and Singapore, Christmas Island is known as one of the most multicultural places in Australia.

The gotong-royong spirit is still going strong on Christmas Island. Everybody in the community comes together to help out for weddings or funerals.

At the height of the pandemic, most of them tuned in to TV3 to stay updated. However, Christmas Island has had zero reported cases of Covid-19 until today!

However, Christmas Islanders are still confronted with injustices.

The Australian government shut down the phosphate mine in 1987. The mine was bought and reopened by union workers in 1990, but other attempts at economic diversification have ended in failure.

Additionally, the fight against the legacy of colonialism is far from over. According to UN Charter Article 73, Christmas Island has many traits of a non-self-governing territory.

However, Australian governments continue to treat it as a distant possession.

The Malay community on Christmas Island works hard to preserve the Malay culture. They remember their roots and strive to pass down these values to the younger generations.

So, while the future of the island remains uncertain, we hope they can continue to call this island their home.