Before Indah Water or Syabas, we had the brave Night Soil Workers handling our sewage system. 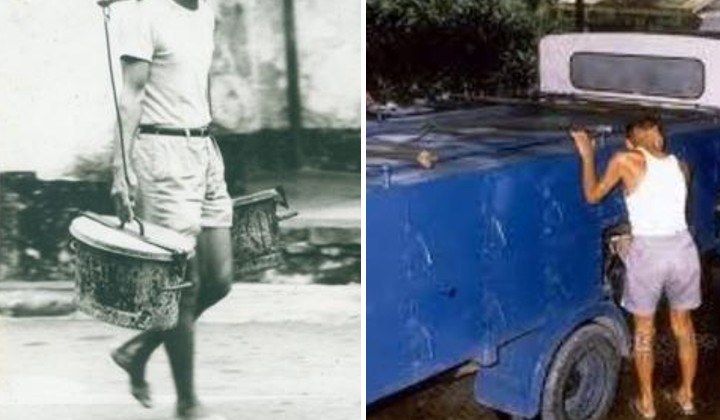 Have you ever thought about what happens to your byproducts after you do your business?

They go into the sewage system, right? But what happens if we do not have an efficient sewage system yet? How do we dispose of our waste?

Let’s go back in time around 50 or 60 years ago when a proper sewage treatment system didn’t exist yet in Malaysia.

Apart from just doing their business in the rivers or burying their poop in the dirt, people back then needed a systematic way to dispose of their excrements.

Then came the unsung heroes, called the Night Soil Carriers. It was one of the looked-down jobs at the time (among the bottom 6 least prestigious jobs in Malaya in the 1960s). But it actually helped the city’s public sanitation and was a very vital job.

These men were shunned due to the nature of their job, which was to carry individual pails of human excrete from houses to trucks where they will be properly disposed of.

They had to wake very early in the morning around 4 or 5 am, go knock on the back of these houses (usually where the toilets are) at 6 am, collect the full pail, replace them with a clean one and carry the filled ones to a 36-door truck, called honey wagons.

Then the truck would take the waste to the main collection centre to be pumped into the sea. When the truck returned, they did it all again, until it was lunchtime.

Usually, the workers would make some noise by throwing the pail cover on the ground or opening a small door on the truck to inform the locals of their arrival. Some nice people even pulled the latrine pail out of the toilet for them.

Some were also rude to them. One worker even remembered that he was once spat on right in front of his face.

Another worker also recalled his first day of work as a “Kang Thao” or head of the night soil worker.

I remember I cried on the first day at work. The smell was unbearable.

But that was just their ‘supervisor’. Imagine the workers themselves, collecting heavy pails of human excrements, and carrying them on poles on their shoulders. It takes enormous guts.

Some of them had to work every day

Some of them had to work 7 days a week, from 6 am to noon, almost without any day off throughout the year. Although they were given annual leaves, most of their holidays were compensated with incentives.

This is because the job doesn’t have many applicants, and without the proper sewage system in the area at the time, they had no choice but to work every day.

After they’re done with this job around noon, they would continue to work other additional jobs like cleaning jobs or building construction jobs to earn extra money.

As cited in The Star, Tan Chin Keat, a son of a night soil worker reminisced the moments when his father had to go out in the morning, in his shorts and singlet, often wearing a cap to avoid people from recognizing him when he was on the job.

Heroes without a cape

“Imagine, if it weren’t for them, everything would collect and people would fall sick. And if floods appear, this would certainly worsen the disease spread among citizens”, said Tan, further.

If you want to find out more about their job, watch a 35-minute documentary created by Purge, where they interviewed some of the night soil workers and their descendants that used to live in the now-demolished Teoh Heng Kongsi (hostel for the night soil workers) in Jalan SP Chelliah, Georgetown, Penang.

The documentary was aimed to give voice to these unsung heroes as some of them even hid the fact of their past job from their children, ashamed. Apart from that, it seeks to document the historical and cultural significance of George Town’s manual bucket latrine or night soil system, which was prominent in the early 1900s.

Alternatively, you can also watch a short video of what a night soil carrier is here.

Take a look at some of the detailed pictures of the night soil carrier and the process behind it here.