Kavin Jay’s I Am Sorry I Shouted! is a comedy show that makes you think more. 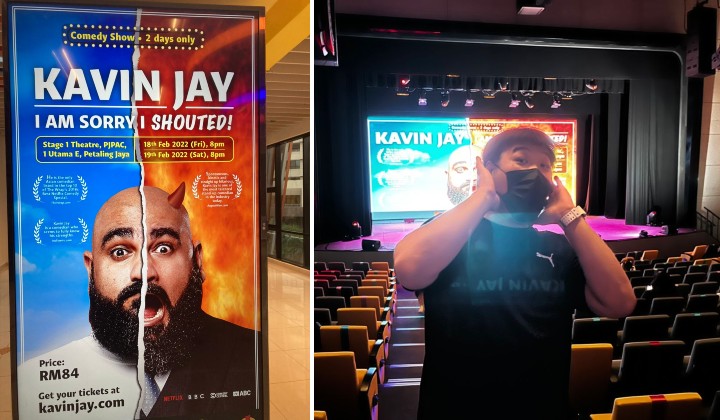 Following the success of his Netflix special Everybody Calm Down, Kavin Jay is back in comedy with his brand new show I Am Sorry I Shouted!, in which Kavin opened up about his relationship with family and how his experiences gave him a different outlook in life.

Performed at the Petaling Jaya Performing Arts Center located at 1 Utama, the show kicked off with two opening acts to get the audience going.

The night began with Riezman as the opening act before Raqib came on to the stage, breaking the ice by acting as the hypeman for the main act, telling stories of his past experiences and how he met Kavin.

Then came the man of the hour: Kavin Jay.

I Am Sorry I Shouted!

Kavin began the show with stories of the pandemic and the hurdles in adapting to it.

As much as I like doing this kind of shows, corporate gigs are the ones that pay big bucks.

Kavin Jay at I Am Sorry I Shouted!

He spoke candidly about his career and his love for comedy. Comedy is a part of who he is and I Am Sorry I Shouted! is a reflection of that, particularly in navigating family relationships, the people who constantly manage to endear and frustrate us.

He shares more about his relatable antics, particularly the pains of being stuck at home during the lockdown with only so much to entertain yourself (or your family!).

Being at home with your daughter, you think you will be fine…

Kavin Jay at I Am Sorry I Shouted!

Kavin also touched on the annoying concern shown by family members who frequently ask questions like “When are you getting married?”, “When are you having kids”, in his comedic fashion that regular fans of his work are used to.

One Step Further Than Comedy

Topics like men’s health or mental wellness are a subject rarely talked about, let alone in a comedy show. However, a good part of Kavin’s show turned into insightful observations about men’s mental health, fatherhood, and family expectations.

He touched on topics that most men never really gave much consideration to. Kavin’s experience of what he and his family had to go through leaves you not only laughing but also thinking.

Never having experienced fatherhood myself personally, it is a rare insight as Kavin shares his stories about juggling between his career and dealing with his wife’s pregnancy.

I was naive about it all, and so was Kavin when he first started his fatherhood journey, as we men rarely think about these things in depth.

If you can’t get pregnant, it’s usually a women’s issue. After all we (men) don’t have a timeline of when our equipment expires.

Kavin Jay on trying to start a family.

He goes on to say if you think about it, we all know whom a woman has to see if they are an issue in that department. But what about the men, do any of you know whom do we see?

The audience went silent– it was not a haha moment as the audience was waiting for the punchline. Kavin took the chance to explain the reality that we are living in, the ignorance of men’s health as men truly do not know where to go or what to expect.

The struggle of him and his wife trying to conceive a child is not a mere easy task, he explains, not only dealing with family pressure internally but also externally as well. Going through the details of what he and his wife had to go through leaves you at least pondering, what if it was me?

Still, he managed to round out the serious topic with dashes of humour, such as the choices he had to make during the time when his daughter was about to be born.

We were paying a lot of money in SGD tho!

Kavin Jay on the (financial) sacrifices he made.

Kavin closes the night going full circle completing the story of why he wanted to do this show. It was because of what he went through and it is something that we as men should not be afraid to discuss or have a conversation about.

I can’t go to the mamak see my guy friends and tell them, hey there is something wrong down there!

Kavin Jay on trying to speak to his friends about fertility issues.

Being the masculine half, he further explains, it’s most likely that none of us men would take it seriously or are eager to have the conversation.

Kavin Jay left the audience with both good jokes and thoughtful introspection. The set had a good balance of funny and thought-provoking material which entertained the crowd and it doesn’t make you feel like you’re being short-changed.

Definitely would recommend it. It’s a fresh take on comedy and I’m amazed to have this kind of talent growing in our own backyard. (5/5)