The list includes local and international titles which will tickle your bones. 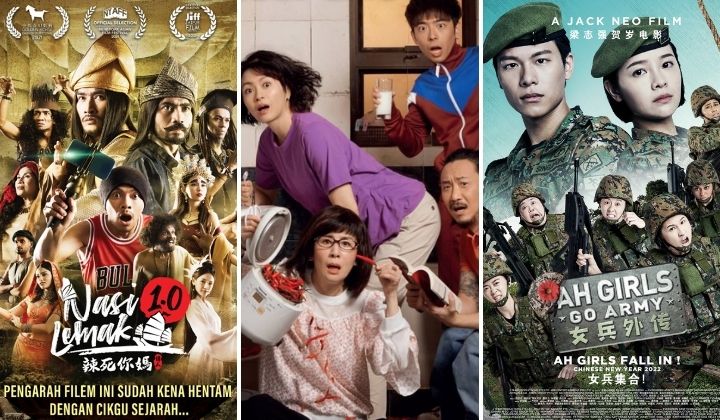 Chinese New Year is a lot of fun for children because they get to play games with their cousins and collect ang paus from adult relatives.

However, the festive days can be a little boring or repetitive for the adults. Why not arrange a movie night for the family to cast boredom far away?

Here are some local and international Chinese New Year movies to watch and have a laugh with the family.

Summary: During an intense cooking competition, Chef Huang (Namewee) inadvertently travels 600 years back in time to the Melaka Sultanate. Once there, he finds himself caught in between the historical conflicts that will happen. Despite the brewing tensions, he created nasi lemak 1.0 and potentially altered history as we know it.

Summary: Chaoyang is embarrassed by his mother’s occupation as a mama-san, so he decides to engage the help of his friend, Wei, to “rent a family” for the reunion dinner with his future father-in-law.

However, the sham falls to pieces when the lie is eventually exposed over dinner. Will Chaoyang be able to repair the relationship with his mother and reconcile with his girlfriend, Zi Hong?

Summary: The comedy film is an extension of Jack Neo’s popular Ah Boys To Men series. It tells of a hypothetical future when Singapore has to recruit women into National Service due to a shortage of men in the country caused by falling birth rates.

Summary: Jack, a Chinese chef-manager who’s in line to take over his family’s restaurant, and Sharifah, a TV programme producer for her celebrity chef father Rahim, are crazy in love. However, both their fathers are against the relationship and it escalated into an all-out cooking competition between both families. Jack and Sharifah must find a solution before it all gets out of hand.

Summary: City boy Hero moved to Xingfuyuan orphanage in the countryside and befriended martial arts novels fan Ah Feng and Aisyah, who dreams of becoming a wrestler. When Hero’s mother did not pick him up as she had promised, the three friends embark on a journey to search for Hero’s family.

Summary: Big brother Dai (Dayo Wong) wants nothing more than to have a good dinner with his two younger half-siblings (Louis Cheung and Peter Chan). But when Dai’s old flame (Stephy Tang) shows up as his brother’s girlfriend, the dinner plans quickly comes apart and it’s up to his girlfriend (Minchen Lim) to calm down the situation.

Summary: The slapstick comedy film is inspired by director Coba Cheng’s family and how they built a chilli-sauce business during the pandemic to keep them sane working from home. While the arrangement was sweet at first, it soon gets on everyone’s nerves and long-hidden family conflicts start to bubble up spicier than the chilli sauce they sell.