Instead of negative side effects, the vaccine had a potentially miraculous result. 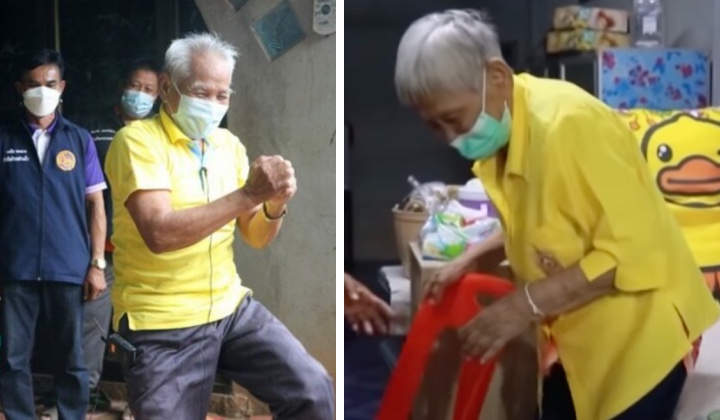 It’s easy to give in to your fears especially during the Covid-19 pandemic and focus only on the bad news, but hope is hard to kill.

As people strive to stay safe, they are naturally drawn to any ‘good news’ that could give them hope that tomorrow will be better.

In Thailand, such ‘good news’ recently emerged in the form of an 85-year-old woman in Thailand who was given a miraculous shot at a second walk of life.

Apparently, her hope of walking again came true just when she least expected it.

She had to stay in bed for the past three years and couldn’t get up.

On November 24, a medical team came to inoculate her with the first dose of the Astra Zeneca vaccine.

Unexpectedly, the next day, the old lady told her family that she felt strong in her limbs and asked her family to help her out of bed and try to walk.

Apparently, the pain and weakness of limbs in the past 3 years suddenly disappeared and she took her first walking steps in years!

After this miraculous phenomenon had happened, she excitedly told her son the good news.

Her family and children were equally very surprised to know it.

According to reports, the incident took place in Nakhon Si Thammarat, a municipality in Southern Thailand.

The director of a hospital in the municipality said that he did not believe it at all at first.

Allegedly, the hospital director knew the patient’s case and that she had been plagued by diseases for many years.

On November 27, accompanied by the county magistrate, he led the team and the media to check on the old woman.

When they arrived, the granny even came forward to greet everyone, walking a bit on the spot for them to see.

The hospital director speculated that the vaccination stimulated the cells in the body, organs and heart, making them stronger.

Added with the fact that the granny was told that her children and grandchildren would be visiting, perhaps she was motivated to get on her feet.

On the other hand, a similar incident occurred in So Phisai district in Bueng Kan Province, northeastern Thailand earlier in October.

According to Thai media Khaosod Online, an elderly man in his seventies claimed that he was cured after receiving the Covid vaccine!

Previously, he had been suffering from a leg problem for years and was unable to walk normally.

The media and health officials, among others, went to his home to check it out, and the old man was on hand to prove that he had recovered by playing Muay Thai (Thai boxing).

I haven’t been that happy for a long time.

Elderly Thai man on his leg getting healed after vaccination.

In any case, the side effects regarding vaccines, whether positive or negative, true or exaggerated, should be viewed rationally by all.

Very often there may not be a direct relationship between the two, even if ‘miracles’ seemingly happen.

But what is certain is that getting vaccinated is one of the most effective ways we have to protect against Covid-19.

Let’s fight the epidemic together and stop the chain of transmission of the virus, especially in the wake of dangerous new mutations.