The evolution of OMEGA watches has been consistent with each James Bond movie with the 007 Edition its most significant yet. 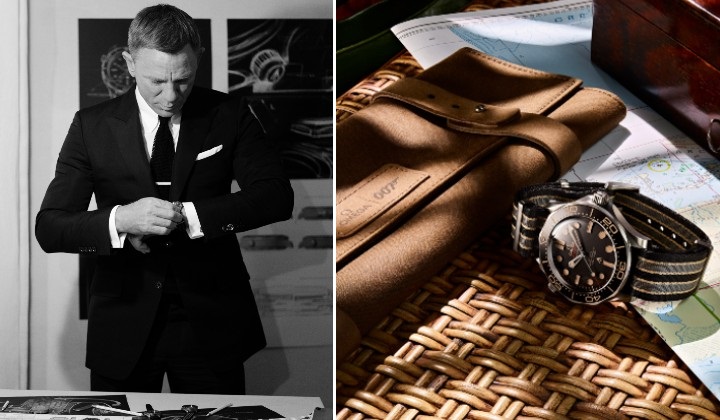 A watch is more than just something you wear on your wrist that tells you time.

Since its creation, they have evolved from more than just a practical tool into something that’s turned into a hobby for some.

The allure of wristwatches is more than how they look or how it makes the person wearing them feel.

The world’s leading online wristwatch magazine HODINKEE says it is also about the value, mechanical ingenuity, precision, resistance to the elements and so on that draws them in.

A paramount example in popular culture where watches maketh the person would have to be in the series of James Bond films.

Read More: James Bond And The Watch That Has Been Saving Him For Over 20 Years

The year was 1993 and the OMEGA Seamaster Diver 300M was first introduced to the market for style aficionados.

It was only in 1995 though when it graced the rugged wrists of Agent 007 and in the subsequent 25 years, OMEGA has worked closely with the James Bond franchise to produce models of the Seamaster that only Bond could trust – and that’s not an easy feat for a secret agent to do!

With James Bond embarking on his next mission in No Time To Die, expect a watch like no other OMEGA– the Seamaster Diver 300M 007 Edition.

And what an intriguing model it is.

Built With Military Needs In Mind

Lest we forget, James Bond is a naval man, a diver, and a discreet gentleman, so wearing a watch that best fits him would have to be one that can stand the death-defying feats he’s famous for.

The Seamaster Diver 300M 007 Edition was even designed with input from Daniel Craig who has played James Bond since 2006.

When working with OMEGA, we decided that a lightweight watch would be key for a military man like 007. I also suggested some vintage touches and colours to give the watch a unique edge. The final piece looks incredible.

The case and bracelet for each 42 mm timepiece have been crafted from Grade 2 Titanium which is particularly strong and lightweight and the 007 Edition is also slightly slimmer than the standard Seamaster Diver 300M models.

OMEGA also introduced an aluminium dial with a colour tone referred to by collectors as “tropical”. The bezel ring of the watch also features the same aged brown hue.

A Watch With Secrets As Big As Bond’s

On the case back, you’ll find a series of numbers that follow the format for genuine military-issue watches.

The letter “A” signifies a watch with a screw-in crown, while 007 is of course James Bond’s iconic agent number.

Finally, the number “62” refers to the year of the very first James Bond film, which for your reference was Dr. No with the late Sean Connery as Bond.

The Seamaster Diver 300M 007 Edition also comes with a NAIAD LOCK case back, which keeps all the engraving in correct alignment.

What is particularly impressive is the movement – the OMEGA Co-Axial Master Chronometer Calibre 8806, which has achieved the industry’s highest standards of precision, chronometric performance and magnetic resistance.

We all know a watch’s precision chronometry is important for it to function, but did you know that having an anti-magnetic one enables it to run with minimal deviation when exposed to a certain level of a magnetic field?

What this essentially means is you’ll spend less time servicing it.

It’s also convenient for those in an occupation in which you are exposed to strong magnetic fields like engineers, medical professionals and even James Bond!

In fact, the watch is able to resist magnetic fields up to 15,000 gauss – which is similar to that of an MRI scanner!

Catch the OMEGA Seamaster 300M 007 Edition on Daniel Craig in his final role as James Bond in No Time To Die – out in Malaysian cinemas on 25 November 2021.