The OMEGA Seamaster has been James Bond’s trusty wristwatch companion since 1995 and has since gotten him out of some very tricky situations. 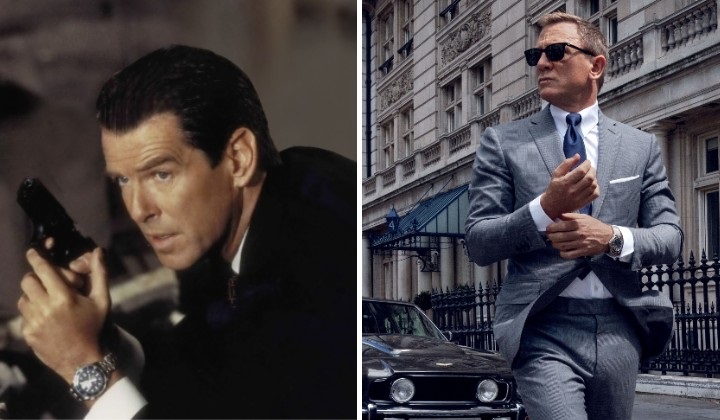 Costume designer Lindy Hemmings went from designing for “normal British movies” as she describes it, like The Krays (1990) and Four Weddings and A Funeral (1994) to extraordinary, action-packed blockbuster films like the James Bond film franchise.

With Lindy on board as the costume designer, it was also the first time James Bond wore a watch by OMEGA and has been for every subsequent production since 1995.

Growing up, Lindy’s father was friends with navy men.

I remember as a child one often visiting us and he always wore this OMEGA, which fascinated me, with its unusually sporty design, looking as though it was built for purpose. It’s the small details that really matter.

OMEGA however wasn’t the popular choice at first but Lindy argued that the previous watches Bond wore were designed more for a man of the city, while Bond of the more recent times is a rugged, action-packed, martial artist, and assassin who goes deep-diving into unknown terrains. The kinds of things a city-living man wouldn’t dare to do.

I went to a props and hand props meeting and argued for the use of OMEGA… I was convinced that Commander Bond, a naval man, a diver, and a discreet gentleman of the world, would wear this watch.

OMEGA as the most sensible choice

In fact, Ian Fleming who wrote the James Bond series of spy novels was a naval intelligence officer himself during WWII – at a time where OMEGA was one of the largest suppliers of watches for British pilots, soldiers and sailors attributing to over 50% of imports.

That said, it would only make sense in reality that James Bond, a naval officer, wears OMEGA.

In retrospect, I guess you could say the most accurate thing about the James Bond movies is the watch!

Combined with a little Hollywood magic, let’s take a look at some iconic Bond moments since 1995 where the watch steals the scene.

GoldenEye (1995) – The introduction of the OMEGA Seamaster timepiece with Pierce Brosnan playing James Bond made quite the impression, not only for its good looks but also for how it featured a laser embedded within the case that Bond used to get out of an armoured carriage on a train.

The watch was real but sadly, the laser function wasn’t.

Tomorrow Never Dies (1997) – In a collection of gadgets and watches belonging to Bond Girl Wai Lin (played by Michelle Yeoh), Bond picks up the Seamaster that conveniently comes with a remote detonator that is used on villain Elliott Carver’s Stealth Boat.

The World Is Not Enough (1999) – Agent 007 is found trapped in an inspection room of a nuclear bunker but thanks to a mini grappling hook inside of his Seamaster, manages to escape.

All OMEGA Seamasters feature a luminous marker for reading in low light, but for this movie, it was bright enough to set the mood in an avalanche survival balloon.

Die Another Day (2002) – Reminiscent of GoldenEye and Tomorrow Never Dies, James Bond’s Seamaster is equipped with a remote detonation button activated via rotating the bezel AND a laser which is emitted from the watch’s main crown.

As usual, Bond finds himself in a predicament that allows him to escape with limited tools at his disposal in which he uses his watch as a knuckleduster.

You might have missed the fleeting scene in the movie but the book goes more into detail about it.

Spectre (2015) – Following a brief hiatus of life-saving devices embedded in the watch, the Spectre Limited Edition Seamaster in the film is equipped with a bomb which 007 detonates to escape yet another sticky situation.

No Time To Die (2021) – While we can’t spoil you with what death-defying stunts are in store for the latest Bond movie, we can tell you that it’s Daniel Craig’s swansong as James Bond.

He even had a close watch on the development of the watch and suggested vintage touches and colour to give it a unique edge.

The Seamaster 300m “007 edition” is the only modern OMEGA that is not for military use that dons the famous Broad Arrow insignia which is a symbol used to mark the issued property of the British Government.

Just goes to show how far the relationship between OMEGA and the James Bond film franchise has come 26 years, nine films, two Bonds and a mega epic watch brand later.

[Watch] Workers Tossed Around By Wind At KL Skyscraper