The day typically starts at 4:30 am and every day is a different experience. 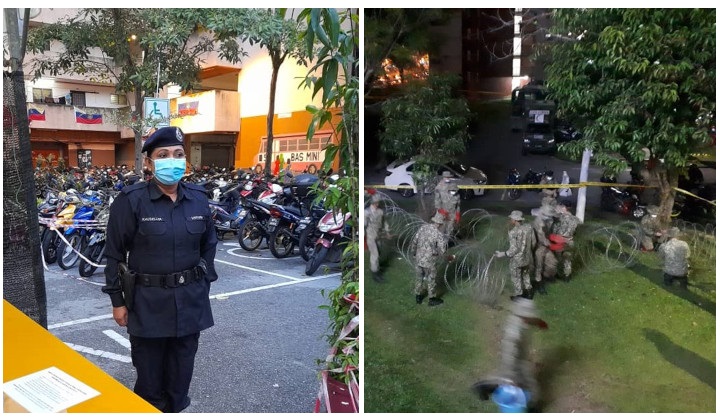 All photos provided by Anu Chandra

The Enhanced Movement Control Order (EMCO) in the Klang Valley may have ended recently but for some, the event was a humble reminder of the reality that brought the need for it.

TRP shares a day in the life of a policewoman, at the frontlines of our nation’s efforts to curb Covid-19.

As a PVR, her role and duties are the same as a regular police officer including the right to carry and use a firearm, and search and arrest while on duty.

They go through the usual police training and even hold the authority card. The only difference according to Anu is they have their day jobs and only work as regular police officers when they are on duty.

TRP: How does a PVR end up patrolling EMCO areas?

Anu: As soon as EMCO was enforced, we (PVR)will receive a circular from PDRM to schedule our jobs. We will then be assigned to particular areas alongside regular police personnel.

TRP: What’s a typical day like for you as a PVR during EMCO?

I patrol a new area every day with instructions only given during roll call at the site.

For example, yesterday you were allowed to go to work with an approval from MITI and your employer, but today no one is allowed to go anywhere (total lockdown) as per the instructions of the day.

TRP: How many people are on duty with you?

TRP: What is the most challenging part of the job?

Anu: Being alert at anytime at any cost.

TRP: What is the best part of the job?

Anu: When the public appreciate our efforts.

We work close with the public to maintain safety. The public also need police to enforce and maintain a functional society.

TRP: Are there any inspiring stories you can share while on patrol during EMCO?

Anu: It was late one night at 2.00am and an Indian couple with a baby walked towards us. Most of us on duty do not have any money on us. The man begged for some money as he had nowhere to sleep. The (Malay) Lance Corporal (L/KPL) took out whatever he had and asked the man to sleep in a hotel with his wife and child. That to me is called being human, without racism.

A challenge for both sides

In our casual chat, Anu reveals that there have been times where people have tried to escape from the areas which often results in an officer chasing them down with most getting caught.

Coming across unruly people with “a lot of excuses” is very common too.

However, the most heart breaking part of the job according to Anu is seeing the elderly in despair with no food, and with no one sending them any either.

When asked how the whole experience as a PVR during EMCO was, Anu replied:

As you know, police are the most vulnerable to public criticism. They make the public obey law and order at all times. Sometimes it’s dangerous trying to restrain them to go against the lockdown, but this EMCO we had a chance to prove that we are there for the public, and to bring down the spread of Covid-19 by risking our lives. There have been some who try to go against the restrictions and we’ve tried  reasoning with them. As a frontliner serving for  PDRM and working closely with KKM, I am proud to say that I am helping to stop the Covid -19 spread.