VAT 69 is an elite special force that serves under PDRM. 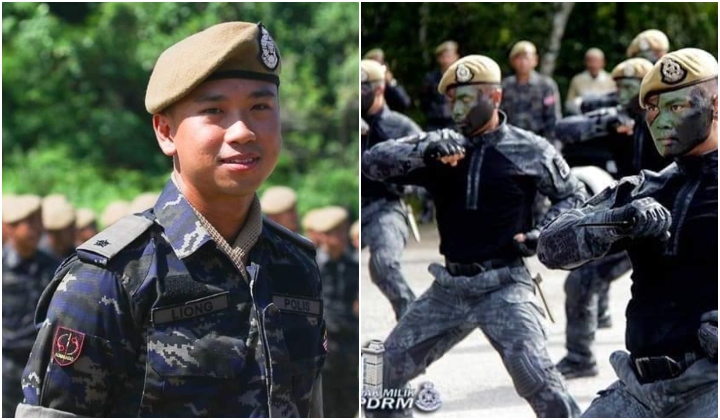 It is a sad reality that the number of ethnic Chinese Malaysians serving in the armed forces have been dwindling over the years – which makes a young chap named Liong’s success in becoming a member of the Very Able Troops 69 Commando (VAT 69 Commando) especially remarkable.

This young man from Batu Pahat, Johor is actually the only ethnically Chinese Malaysian to among 500 commandos to make the cut into the elite special force that serves under the Royal Malaysia Police (PDRM).

Despite graduating with a degree in Computer Science from University Putra Malaysia (UPM), Liong declined job offers in the IT field. He instead chose to join PDRM in August 2015, which became the stepping stone for his enrollment into the VAT 69 Commando.

In a 2018 interview with Sinchew Daily, Liong said that his interest in joining the elite armed force unit was not only a personal goal, but also a decision driven by his desire to serve the country.

The VAT 69 Commando unit is widely regarded as one of Malaysia’s most elite defence and security units, which is reflected by the gruelling tests one has to endure in order to prove their worth.

According to Liong, there were 600 applicants in his batch but only 13 people passed the selection phase.

The first stage of training was carried out on land, involving jungle survival where he spent two weeks in the wilderness without food.

The training then continued on to sea, land and air environments and included an assortment of dangerous tasks such as fast-roping from the helicopter, diving, combat, and parachuting.

The training is on par with what the United States’ Navy SEALs undergo.

Due to the intense mental and physical toll of the training, Liong revealed that he lost 10 kilograms after four months of rigorous training.

All the training was very hard and dangerous, but in order to become a VAT 69 Commando, I gritted my teeth and constantly overcame many psychological barriers to finally become a commando.

What makes the VAT 69 Commando so special, though?

VAT 69 Commando was first established in October 1969 following the rise of the Malayan Communist Party (CPM). From over 1,000 candidates nationwide, only 60 were selected to be part of the first batch of the commando unit and the recruitment was conducted strictly for those aged between 20 to 25 years. The pioneer troopers of VAT 69 Commando were trained by the British Special Air Service (SAS).

Back then, the main task was to track down and terminate the communists via guerilla warfare. Due to this reason, a large number of the operations were conducted deep in the jungle, with each operation lasting for at least two weeks up to three months – a draining mental and physical challenge.

Today, their main mission is to conduct high-risk tasks such as counter-terrorism, hostage rescue, intelligence gathering and counter-insurgency within the borders of Malaysia.

Among their most well known counter-terrorism missions include the 2000 Operation Dawn against the militants of Al-Ma’unah who had stolen thousands of weapons from two control posts of the Rejimen Askar Wataniah (Territorial Army Regiment) camp in Kuala Rui, Perak, as well as hunting down Sulu terrorists at the 2013 Lahad Datu conflict in Sabah.

For an in-depth look at the early days of the VAT 69 Commando unit, check out this documentary by History Channel Asia: