It’s not uncommon to have hail storms in Malaysia, especially with global warming in the picture. 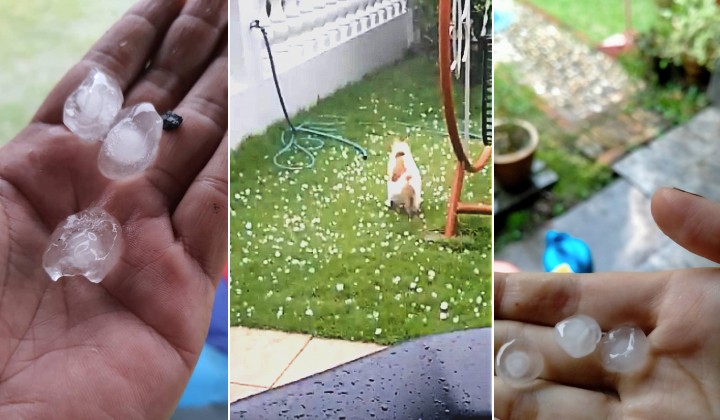 Things got a bit chilly in our nation’s capital on Monday (24 January) when hail showers were reported in Kuala Lumpur and other parts of the Klang Valley.

According to the Malaysian Meteorological Department (MetMalaysia), the event occurred due to a “severe thunderstorm” coupled with heavy rains and strong winds at around 4pm.

Online, netizens were seen sharing images of the icy weather and momentos that they’ve collected during the natural phenomenon.

As far as we’ve checked, no serious injuries or severe property damage were reported from the event.

What the ‘hail’ is going on?

Though rare,  it’s not too uncommon for hail storms to occur here in these parts of the world.

MetMalaysia explained that it’s quite normal for hail to rain down across the country. This usually occurs as a localised event or is limited to only a few areas that are covered by cumulonimbus clouds.

Such events would last between 10 to 20 minutes and cause hail the size of marbles or around 1.5mm to fall from the sky.

Hailstones are basically precipitation or water in the atmosphere that falls down to earth like rain and snow.

Think of ’em as ice cubes falling from the heavens.

Hail forms when drops of water, which would typically fall as rain, are instead pushed upwards by strong updrafts into the upper, colder regions of a storm cloud.

These raindrops then freeze together into chunks of ice, forming layer by layer as more water freezes onto the hailstone’s surface.

Once it becomes too heavy for the wind to carry it upwards, or if the updraft weakens or stops, these ice chunks that can measure between 5mm to 15cm then fall to the ground as hail.

According to Prof Fredolin Tangang, Chairman of the Department of Earth Sciences and Environment at Universiti Kebangsaan Malaysia (UKM), here in Malaysia, hail would occur during episodes of deep atmospheric convection or when towering cumulonimbus clouds form way up in the sky, in just the right conditions.

It needs the right ingredient; plenty of moisture, heat and no strong wind aloft…

The Professor explains that these conditions are typically present during Malaysia’s inter-monsoon periods (check out our previous article, HERE, to find out more about Malaysia’s monsoon seasons) during the months of April and May, as well as between September and October when strong winds hit the country from multiple directions, causing thunderstorms and in some occasions, hail to fall.

Curiously, we asked Prof. Fredolin whether Malaysia would be experiencing more hailstorms in the coming future, with global warming, climate change and whatnot, going on. And his answer seems to be pointing in the direction of a YES.

It is a bit uncommon but it happened before and it can happen again… It is possible due to the higher availability of moisture and heat.

As a safety advisory, MetMalaysia provided some safety tips for people who’re caught in such a phenomenon. During hailstorms, it is advised to:

Last year, social media was flooded with videos and images of ice falling from the sky in Cheras, Kuala Lumpur and Selama, Perak on Wednesday (3 March) afternoon, while a similar storm was reported in Kubang Pasu, Kedah that same day.

Although the storm sent most people ducking for cover, others marvelled at the wondrous phenomenon – even grabbing a few frozen souvenirs along the way.

Over the years hail has rained down in parts of Selangor, Johor, Sarawak and Sabah.

In fact, peeps in Perak experienced similar hail showers in 2020 which also caused quite the chatter, then.

Here’s to hoping we don’t need to be wearing helmets out in a storm in the days to come.