Is an individual’s nationality and skin colour tied to class and status? 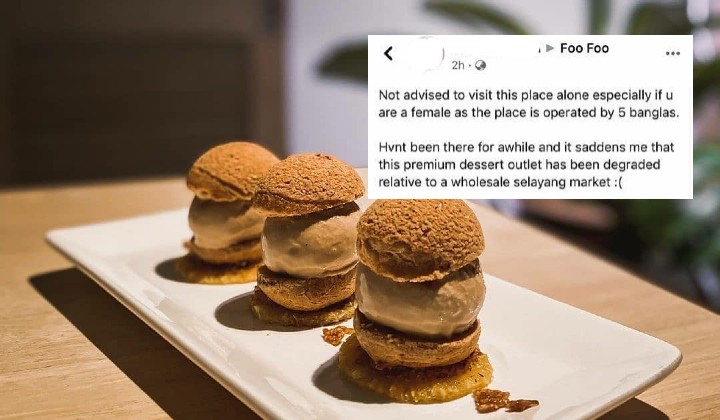 A female patron to premium dessert shop Foo Foo in TTDI recently felt the need to express her discomfort at seeing the shop being manned by five foreign workers.

She compared the dessert shop to a “wholesale Selayang market” due to their hired staff, implying that hiring foreign workers degraded the shop’s ‘premium’ status, and cautioned other female patrons from visiting.

However, Malaysians soon caught wind and left scathing remarks of their own.

Most netizens immediately pointed out her callous racism and the need to air it in public and on Foo Foo’s Facebook page itself.

Others defended the foreign workers, including the alleged owner, who steadfastly supported his workers.

In a now-deleted screenshot, he claimed that his workers are good people who communicate in Malay and English well, and have more than four years of experience working with the owners in creating and plating desserts.

However, most pointed out that the original poster was not alone in her thoughts, as racism against foreign workers is persistent and rampant among Malaysians.

Even more urged others to be thankful for foreign workers, who end up doing 3D (dirty, dangerous, and difficult) jobs that locals may not want to, keeping our economies running. After all, they are human too.

When calling out turns to cyberbullying

Unfortunately, due to her public post, netizens have gathered on multiple social media platforms to criticize her relentlessly, even naming her “Malaysian Karen”. (Karen is a pejorative term used to describe a woman perceived as entitled or demanding beyond the scope of what is appropriate or necessary.)

Her original posts and the owner’s response have since been deleted, but internet sleuths have discovered and made public her position of employment on the internet, leading to additional hate and complaints directed towards her place of employment.

Read more: Malaysia Might Make Cyberbullying Illegal Soon, But Are We Ready?

While racism is wrong and should be addressed, when does criticism become too much and turn into cyberbullying?

TRP has reached out to Foo Foo for comments.