They’ve had to survive on just six months of income for the whole year. 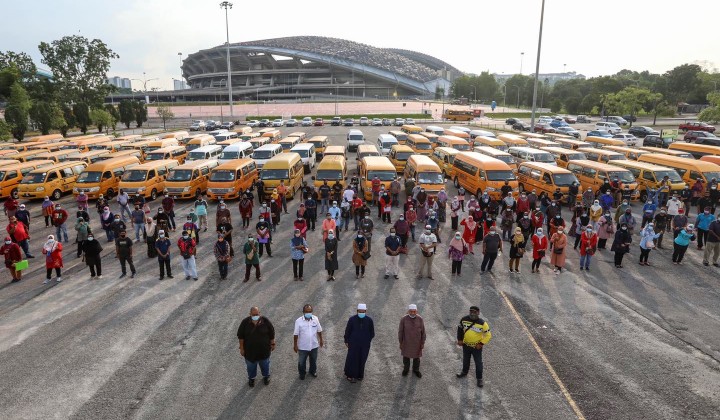 Most of the conversation surrounding school closures have been focused on the accessibility of online learning and how parents struggle to take care of their kids while working from home.

Meanwhile, the plight of bus drivers, who have lost their livelihood due to the decision to close schools has gone largely unnoticed.

Malay Mail recently reported that thousands of school bus operators may have to sell off their vehicles and close down their business due to the continued closure of schools under the conditional movement control order (CMCO).

The issue was brought further to light after popular preacher Ustaz Ebit Lew shared how he assisted the bus operating community recently.

In a post on Facebook, Ustaz Ebit talked about how local bus operators have only been able to work for six months this whole year due to the intermittent school closures that resulted from the Covid-19 pandemic.

Sadly, for the year 2020, they’ve only had income for 6 months. For the other 6 months, they went by with no income. How are they to survive with only six months of income to accommodate them for the whole year?

He highlighted the important role school bus drivers play, adding that they ensure the children of working parents get to school safely and have a chance at growing up to be noble and successful people.

According to Ustaz Ebit, to make up for the lost profit, many bus drivers have tried looking for extra cash elsewhere. Some have signed up to the delivery services, while others tried their hand at selling baked goods or setting up small businesses.

Although Ustaz Ebit could not help much, he passed 250 drivers some groceries packed from his convenience store, Elewsmart, and gave a handful of others a little bit of pocket money.

These days, it’s not easy to start a business. Oh Allah, many large companies have also been forced to shut their doors.

As usual, his continued efforts at helping the public won praises from user online, especially over the fact that Ustaz Ebit helps everyone, regardless of race or faith.

Many could not continue to pay for their loans and could not survive with zero income so we have lost about 4,000 members since the MCO and now this CMCO, it will mean another three months of zero income.

Despite the government ruling that all economic sectors were allowed to continue operating during this CMCO, this sadly didn’t apply for bus operators. With schools being closed, school bus operators were effectively left jobless.

With no guarantee that schools would not be closed again under another CMCO in the future, decisions like school closures may be an annoyance to some, but to others, it feels almost like a death sentence.

Schools will only reopen on January 20 next year so this means from now till then, we will have zero income. How are we to survive?

The CMCO in Klang Valley, which began on 14 October and was initially supposed to last for just two weeks, has been extended to include most states in the Peninsular until 6 December.

Meanwhile, Sabah has been under CMCO since 13 October.

Due to this, the Ministry of Education decided to close all schools for the rest of the year and only reopen next year.