Over half a century of history. 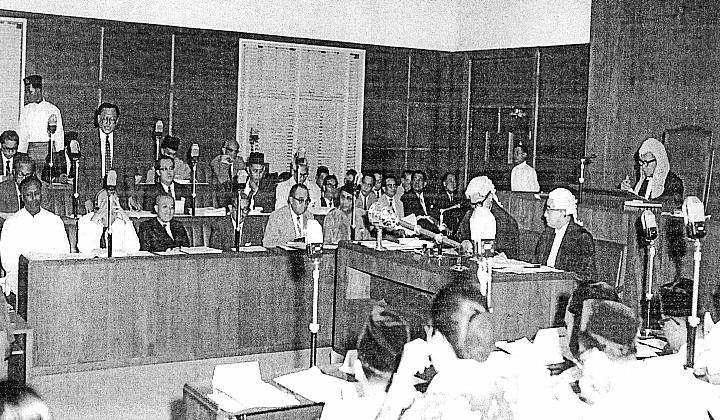 The Malaysian Parliament has been a symbol of our nation’s independence and democracy for over half a century.

Modelled after the British Westminster system, the Parliament functions as the country’s legislative body, put in charge of enacting laws and regulations enforced in Malaysia.

Read more: What Does Malaysia’s Parliament Actually Do?

In the spirit of Merdeka, TRP takes a look at among the many “1st” in the history of the nation’s legislative authority.

The Parliament of the Federation of Malaya was established in 1959 following the nation’s first General Elections (GE) after Merdeka in 1957.

Convening for the first time on September 11, 1959, the inaugural meeting was held at the Tunku Abdul Rahman Hall in Jalan Ampang, Kuala Lumpur, where historically, the building had been the residence of a wealthy Chinese businessman by the name of Eu Tong Sen, who made a fortune in mining and estates.

The home was converted into the official meeting halls for the Dewan Negara (Senate) and the Dewan Rakyat (House of Representatives) before later becoming the Malaysian Tourism and Information Centre (MATIC) as we know it today.

The meeting was officiated by our nation’s very first Yang di-pertuan Agong (YDPA) Tuanku Abdul Rahman Ibni Almarhum Tuanku Muhammad, who in his opening speech, addressed Parliament as the “crown”, “climax” and “the very essence” of our Constitution.

Among Parliament’s first order of business was to appoint the Yang di-Pertua Dewan Negara and the Speaker of the Dewan Rakyat.

The meeting also saw the country’s first 38 Senators and 104 Members of Parliament (MP) being sworn into office, which included the likes of the nation’s founding fathers such as Tunku Abdul Rahman, Tun Dr Ismail Abdul Rahman and Tun V.T. Sambanthan.

Peeking through the county’s archives, it’s noted that among the topics brought up in the Parliament meetings included discussions about citizenship, budgets, and taxes, as well as amendments to several laws.

During the time, Malaysia was governed by a representative majority held by the United Malays National Organisation (UMNO), the Malaysian Indian Congress (MIC), and the Malaysian Chinese Association (MCA).

That year also saw the legislative body moving to the official Parliament Building near the Lake Gardens or what we now know today as Taman Tasik Perdana, chosen because it was close to the KL city centre.

Construction of the building began in 1961 and had been the brainchild of Malaysia’s first Prime Minister, Tunku Abdul Rahman, who wanted an exclusive location for one of the country’s most important institutions for privacy and security reasons.

During the construction, a time capsule made from marble was set at the very foundations of the building. The capsule contained several things, including a Hansard copy of Parliament’s first meeting, newspapers of the time, some old currency notes as well as pieces of tin ore, rubber, and some rice paddy as sentimental symbols representing the country and its people.

The building then consisted of a main 3-storey block, a 17-storey tower housing the offices of ministers and MPs from the Government and the Opposition, as well as a multipurpose hall equipped with recreational facilities and a banquet hall that accommodates around 500 guests. The building also has its own pool, fountains, outdoor gardens and even a Deer Park with living, breathing animals.

In 2017, the Parliament Building was officially made into a National Heritage site.

In 1969, the Malaysian Parliament was suspended for the first time following the May 13 racial riots, only to reconvene again in 1971.

During the time a state of emergency was declared and the National Operations Council (NOC) was put in charge of administering the country to restore law and order.

Read More: MAGERAN: Dr M’s Solution From 1969 To Save Malaysia, But What Is It?

On 12 Jan 2021, YDPA Al-Sultan Abdullah Ri’ayatuddin Al-Mustafa Billah Shah has consented to declare the Covid-19 Health Emergency that was supposed to last till 1 August.

With ongoing pressures, however, the Prime Minister’s Office (PMO) had announced that Parliament will reconvene for a period of 5 days ahead of August beginning 26 July.