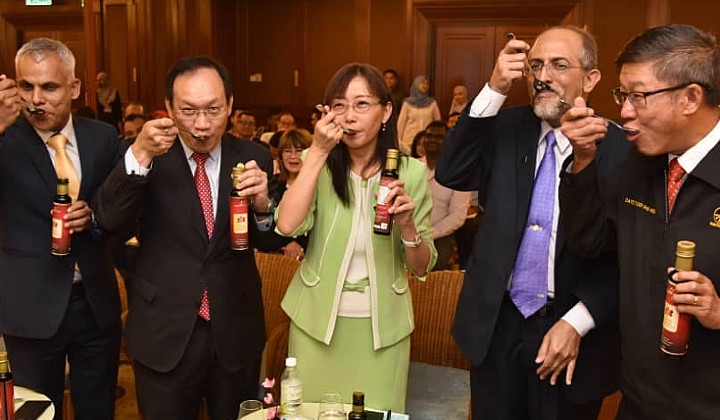 On July 16, 2020, in Parliament, Plantation Industries & Commodities Minister Datuk Mohd Khairuddin Aman Razali has encouraged Malaysians to do the same.

Mohd Khairuddin, who himself is from PAS, even distributed red palm oil for free to all Members of Parliament, backing up Teresa’s claims that it contains tocotrienol- a form of Vitamin E.

But the question remains, “should you drink a spoonful of palm oil everyday or not?” Here’s what we found out.

Oil produced from palm fruit is called palm oil, but the type of oil and its nutritional value varies according to the way it is processed.

Red palm oil is mildly processed, so it retains a lot of the healthy components such as carotenoids and antioxidants that are lost in traditional physical or chemical palm oil refining.

It is this carotene that gives it the reddish hue, so the palm oil is deodorised at a low temperature to avoid thermal destruction of the carotenes.

In an ideal world, companies could sell unprocessed crude palm oil straight from the fruit as it has a high content of carotenoids, including β-carotene (a vitamin A precursor that gives carrots their color) and lycopene (protects against sunburns and certain types of cancers).

The oil is also rich in antioxidants, such as vitamin E isomers (tocopherols and tocotrienols), and phytosterols.

But due to its pungent smell and flavour, refining is required to make it palatable for use in cooking.

Without the need of hydrogenation, palm oil is a naturally trans fat-free oil.

Several studies have also shown some health benefits that include reduced blood pressure, improved circulation and normalized cholesterol levels. It can also provide increased protection for skin from sun damage and other environmental pollutants.

And as Teresa Kok and Mohd Khairuddin say, red palm oil does have a pretty high concentration of Vitamin E.

The Oxford Academic Nutrition Reviews indicates that palm oil contains about 19% of tocopherol (vitamin E). The paper also notes the potential effectiveness of red palm oil to overcome vitamin A deficiency in children and pregnant women and to improve visual and eye complications caused by vitamin A deficiency.

In comparison, the cooking palm oil Malaysians typically use in the kitchen is the refined, bleached, and deodorized (RBD) palm oil that is bland, odorless, light yellow in colour.

So its nutritional value is significantly less than red palm oil.

Should you drink a spoonful of palm oil or not?

However, one of the biggest push back against drinking red palm oil is the fact that palm oil (red or otherwise) contains a higher percentage of saturated fats compared to other vegetable oils – which has long been linked to heart disease.

The British National Health Service recommends the total fat intake for an adult should not exceed 70g in total with less that 20g of saturated fats.

So taking a spoonful of red palm oil is below the daily recommended intake (about 20% of total), though you would have to monitor other sources of fats in your diet.

The World Health Organisation (WHO) also notes that reports of the health impacts of palm oil consumption in foods are mixed.

Some studies link consumption of palm oil to increased heart disease mortality, and increased risk of cardiovascular disease while other studies show no negative effects or even favourable health outcomes from palm oil consumption.

The paper published in the Bulletin of the World Health Organization also found that four of the 9 studies in their literature search showing overwhelmingly positive health associations were authored by the Malaysian Palm Oil Board (MPOB) – which they noted called into question the credibility of claims in favour of increased palm oil consumption.

In general, the consensus among researchers seem to be that yes, red palm oil does have some highly beneficial compounds, but a lot more research is needed to determine the cardiovascular risk.