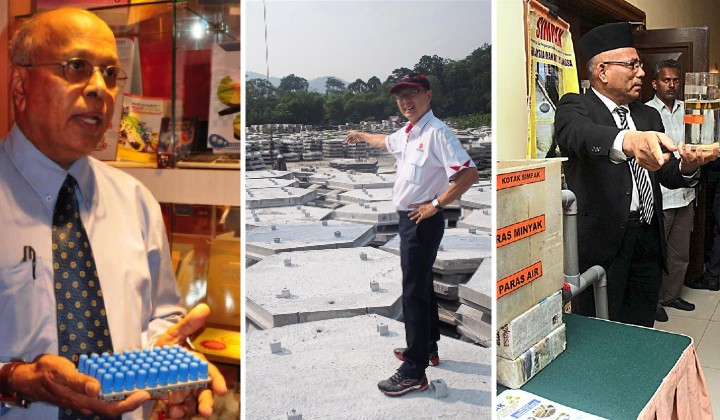 Malaysians are a creative and innovative bunch, we have excelled in many fields from gaming design, visual effects, and some are even capable of creating Oscar-worthy movies.

But did you know that some of the things that we use every day and some times take for granted are also invented by our fellow Malaysians?

Here are five inventors and their inventions that you should be aware of:

The Sekinchan-born Datuk Pua Khein Seng is responsible for the invention of the world’s first single-chip USB flash drive controller which was released in June 2001, a year after his company was established.

A USB flash drive is a data storage device that includes flash memory with an integrated USB interface.

It is typically removable, rewritable and much smaller than an optical disc or a floppy disk.

He started a company called Phison Electronics Corp in 2000 in Taiwan which has shipped over 600 million controllers worldwide yearly and reached USD1.3 billion in sales revenue.

It is a contraption that turns waste from restaurants and turns it into biofuel.

Simplas is a rectangle-shaped tank that traps and isolates solids, grease, fats, and liquids.

It’s made up of a suspended strainer basket and netted divider to trap all solids that managed to get through the pipes. It also has a T-trap that further avoids grease and fat from escaping into the pipes leading to the drains.

The grease and fats are then managed using a biotechnical method to treat grease and fats including used cooking oil to produce biodiesel, an environmentally friendly by-product and an alternative to petrodiesel.

Have you noticed these when driving along the highway?

It is a type of reinforced soil system that is supported by steel bars and anchored by precast concrete blocks.

The front consists of modular hexagonal-shaped concrete panels that interlock which creates that distinct pattern.

Besides being able to save construction costs, it can also be built faster and is more durable than other types of walls.

The company has exported the technology to Singapore, India, Bangladesh, Sri Lanka, and Indonesia and they have built over 2.2 million mÂ² of Nehemiah walls with varying heights, configurations and applications.

Silverfil Argentum is the world’s first and only amalgam that has zero excess mercury upon setting. It has also been proven to have no evidence of genotoxicity.

Amalgam is used in dentistry to fill cavities caused by tooth decay.

Before the invention of the product, amalgams usually contain mercury that could lead to toxicity.

Also, Dr S. Radhakrishnan’s invention is environmentally friendly and the waste is easy to be disposed of as it is a non-hazardous waste, unlike different amalgams which contain excess mercury.

We’re pretty sure you’ve seen one of these at your local kopitiam before.

The Kuala Pilah native had the idea when he was working deep in the jungles of Kelantan for a timber company in 1973.

Hew and his co-workers liked to eat half boiled eggs for breakfast, which turned out hard-boiled instead when they tried to make them.

To solve the problem, he invented the prototype of the first generation egg boiler, called the Egg-Matic.

Although he ended up selling the prototype, intellectual property, and ownership to a plastics manufacturer, Hew came up with the 2nd generation Egg-Matic that he sold himself.

Hew’s passion for inventions didn’t stop there, he also invented other things such as a rubber tapping knife with changeable blades, a deodorizing device for water closets, combined toothbrush and dental floss and even a brain-bending polygon logical toy.

We are certainly proud that these Malaysians are able to create ingenious inventions that puts the country on the map.