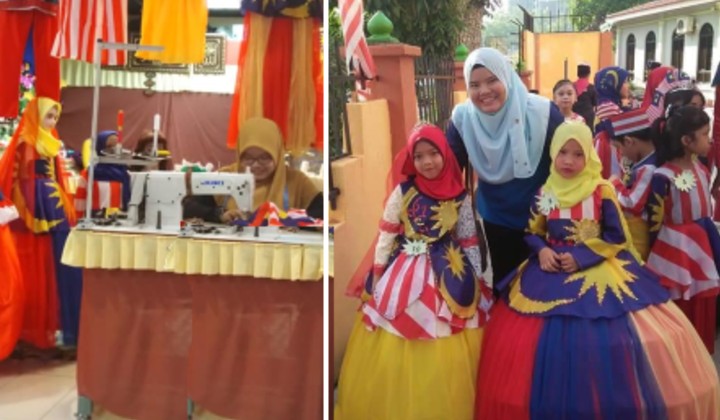 In the spirit of Merdeka, we found Mahani Udit, a single mother of three who accidentally turned a hobby into a national income.

In 2015, Mahani decided to put her sewing skills to test when she sent her children to a â€˜best patriotic outfitâ€™ competition.

To her surprise, they won!

Their costume was so good that parents and teachers started ordering Merdeka day costumes from her ever since!

When TRP interviewed her, Mahani shares how dressing up her children turned out to be the best hobby she ever had.

I have always used my kids as my models and test subjects.

When I first made the Merdeka costume, it was just to test how far I can create clothes….didnâ€™t know it would be so welcomed.

Mahani explains that when her husband left her, she struggled financially.

So on top of being a full-time coconut water hawker, she used to take tailoring orders as a side income.

However, when her sewing gained a steady reputation, she slowly built it into a business.

Now, she owns her own boutique, Anggerik Rimba Alteration in Bukit Jambul, Penang.

Last year, she received over 1,000 orders for national flag outfits.

She also has ready-made flag-outfits that are sold from an affordable price of RM70 at her store (and also via post).

Unfortunately, her flag-outfits are only available for children.

Adult sized flag outfits on the hand, need to be custom-made and varies in price depending on the difficulty of the costume.

The Legends Who Took Malaysia’s Most Iconic Photographs