Quek believes that BN and MCA can provide the best service to the people. 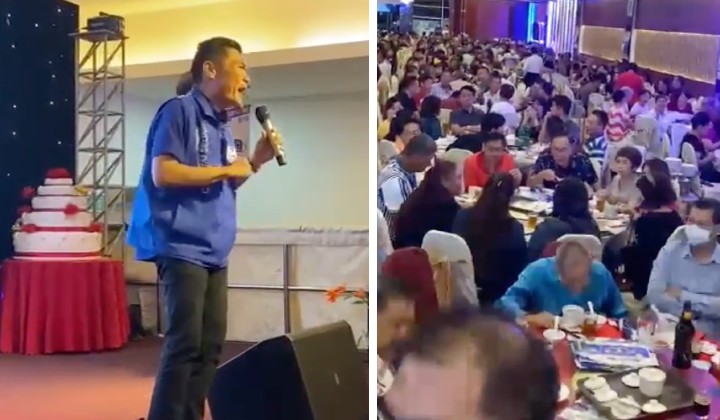 Election fever has gripped the country ahead of the 15th General Election’s (GE15) polling day this 19 November, and politicians, both upstarts and veterans, are leaving nothing to chance.

Barisan Nasional (BN) candidate for Indera Mahkota, Datuk Quek Tai Seong, ‘begged’ and ‘cried’ for the people of Kuantan to vote for him as their MP.

Speaking at a dinner, the MCA man urged the audience to give him the strength to serve the rakyat.

Quek said MCA has plans to help the rakyat, but first, they need to vote for BN.

A recording of his speech has gone viral and widely shared on social media, including Whatsapp.

Please give me the strength. Please don’t say you don’t support MCA. We have many things we want to do for the people. So please, you must support me. I beg you.

Quek was so passionate in his speech that he appeared to be in tears.

He spoke to a large audience who seemed distracted by their meals at a dining hall in Kuantan.

His ‘desperation’ is understandable, given that he has an uphill task.

Previously, he was a senior manager at a multinational company, British Petroleum.

Being fluent in Malay has been an asset for Quek in his campaigning.

He has been called Mat Quek by the Malay voters while campaigning.

Quek has been serving the community here since 2006, when he started working as a special officer to then Semambu state assemblyman Datuk Pang Tsu Ming.

The issues in Indera Mahkota include land issues, welfare and upgrading of infrastructure such as roads.

MCA cannot expect to be handed the Chinese votes in GE15, as observation shows many may give their votes to DAP.

MCA has been struggling to win the hearts of the Chinese voters, and it will also have to continue depending on UMNO to remain relevant.

From there, the party’s popularity dropped faster than the ringgit’s value.

In the 2018 election, MCA recorded its worst-ever defeat.

It lost all state seats it has contested save for one elected representative in the Parliament.

On Its Last Legs

In Malay, they have a saying that sums it up: ‘Hidup Segan, Mati Tak Mau’ (too timid to live, but unwilling to die).

These days, MCA has become the butt of jokes, especially among the Chinese community.

They poked fun at the party’s method of attracting voters, which included singing and dancing shows with free beer.

Many Chinese also continue to resent the party for its subservience to Umno.

Across the racial divide, MCA had been accused of being anti-Islam, especially for its stance against hudud.

Its persistence paid off when MCA won four state seats at the Johor state election in September.