Lee attended a badminton game at the invitation of the BN candidate for Sungai Buloh, Khairy Jamaluddin. 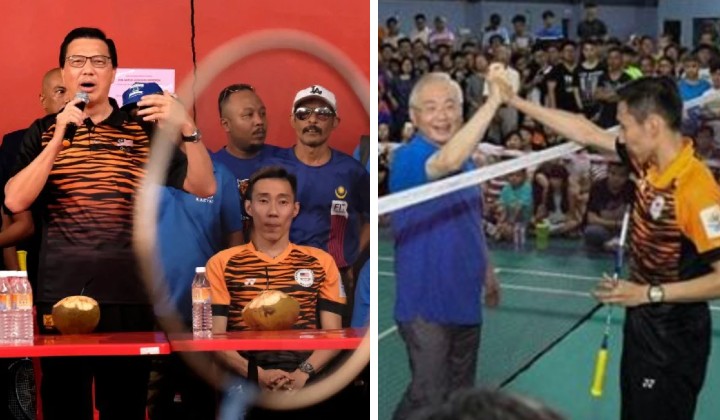 He also appeared this morning in Sungai Buloh to attend a badminton event hosted
by Umno candidate and caretaker Health Minister Khairy Jamaluddin.

It didn’t help that BN leaders are expressing thanks to Lee on social media, which added to the perception that he is supporting them politically.

Lee emphasized that he does not only attend BN activities and will accept any invitation from others.

When asked by the media whether he would help other BN candidates in the 15th General Election (GE15), Lee pointed out that his attendance was mainly to promote badminton.

He said Khairy invited him to participate because there was a badminton game.

It’s not just Barisan Nasional, anyone can call me. Because this is a badminton activity, I want to help the younger generation like badminton.

He also attended the activities of the BN candidate for the Kulai Parliamentary seat, Chua Jian Boon.

The former Deputy Minister of Youth and Sports said he was moved to receive a visit from Lee, who was willing to come to Pagoh to meet him.

The fact is, Lee had known him for a long time and acknowledged that Razali was an individual who looked after the welfare of the athletes.

Lee said they are good friends and Razali is like a family member to him.

In the past, Lee had also been criticised for allegedly helping Pakatan Harapan (PH) when all he did was give back to society.

How Did Lee Become Famous?

Lee won a silver medal in the Olympic Games 2012.

He also won the ninth Malaysian Open title in 2013 and beat the record for the maximum number of home titles held by Wong Peng Soon,  a Malayan/Singaporean badminton player who reigned as a top player in Malaya from the 1930s to the 1950s.

Lee bagged the Masters’ Finals title for the fourth time in the Super Series tournament.

He won his tenth Malaysian Open title in 2014.

Lee is often compared with China’s Lin Dan, who won all the world champion titles a player can win.

Hold up – is Datin Rosmah sitting right smack in between Datuk Lee Chong Wei & his wife at their wedding dinner…? pic.twitter.com/WuwdCdko