Pulau Bangau is accessible to the public and has become a popular haunt for birdwatchers, photographers and anglers. 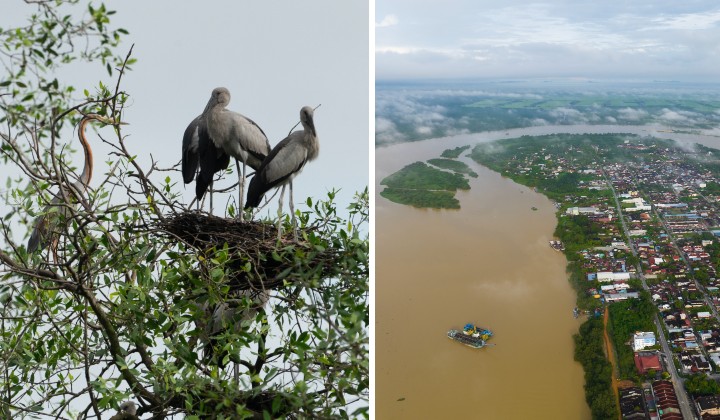 Every day when the sun goes down, about 50,000 birds of various species fly back to their flock nests in Pulau Bangau (Stork Island) after a day out looking for food.

These birds flew low across Sungai Perak, looking like Japanese planes about to attack enemy ships during the Second World War.

Located in Teluk Intan, Pulau Bangau is touted as the nation’s largest heronry and is fast becoming renowned as a birdwatchers’ paradise.

Pulau Bangau is blessed with a large population of storks and other bird species such as eagles, hornbills, purple heralds, grey heralds, little egrets and cattle egrets.

Ecomy chief executive officer Andrew Sebastian to TRP on the richness of biodiversity in Pulau Bangau.

Sebastian, who is a well-regarded naturalist, environmentalist and sought-after nature/bird guide, said there are no words that can describe how beautiful the scenery in Pulau Bangau is.

He said it is the best place in Malaysia to see thousands of birds flying back to their nests as dusk approaches before landing on the branches.

Sebastian added that it would be a waste if the potential of developing the area as a tourist attraction is ignored.

To this end, conservation proposals are being drawn and submitted to the authorities for further action.

Sebastian said the ultimate goal is to promote Pulau Bangau as a nature-based, environmentally educated and sustainably managed ecotourism product.

Ecotourism can result in an overall increase in species survival over time if tourism is managed correctly. Ecotourism is increasingly being used as a conservation tool worldwide and is effective in preserving threatened biodiversity.

Ecomy chief executive officer Andrew Sebastian to TRP on the benefits of ecotourism.

A Positive Impact On The Local Economy

He runs a boat operating company, allowing the public to experience this exciting experience.

According to him, the best time to see these birds is in the evening, besides being able to watch the sunset.

Usually, these birds will go out at 5.30 in the morning to look for food up in paddy fields before returning to the nest at 6.30 in the afternoon.

Local tour guide Muhammad Sahril to TRP on the best time to see the birds.

He said the 14.3-hectare Pulau Bangau is the choice for birds due to its strategic position in the middle of a river that is difficult for human intruders to reach.

A typical river cruise to Pulau Bangau takes between 45 and 90 minutes, with fares ranging from RM18 for children to RM60 for adults.

Ready For A New Season Of Birding?

Visitors are reminded to bring binoculars because they are the go-to optical tool when it is time to see a rare bird up close.

For photo lovers, it would be more satisfying if these beautiful moments were captured using a single-lens reflex camera (digital SLR or DSLR).