Many degree holders are working part-time gigs or entry-level jobs that they are technically overqualified for. 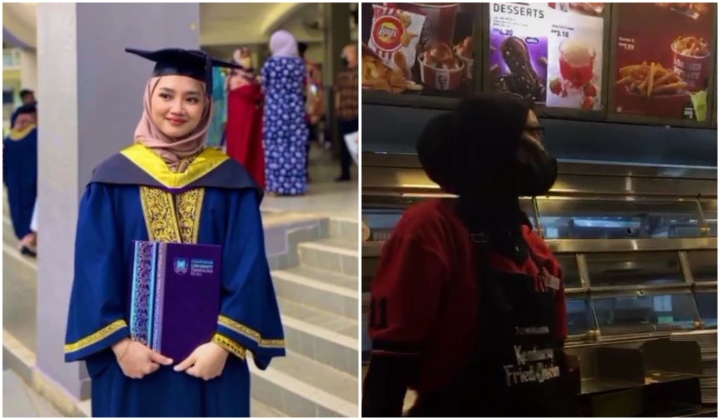 Recently, a Tiktok video went viral for showing the severe lack of underemployment among graduates.

The video posted by user Ainxang shows her graduating with a Bachelor of Science Degree in Chemistry (with honours!) from Universiti Teknologi Mara, but currently working the counter at fast food chain KFC.

In the caption, she notes that ‘there’s no perfect job’ but is grateful for the employment opportunity anyway.

Most of the comments applauded her positive outlook, but even more were other degree holders who were working other kinds of retail and entry-level jobs.

Another commenter noted that they have a master’s degree but ended up selling waffles instead.

A majority of the comments suggested that any job is good as long as there’s adequate pay. At the end of the day, people just need their jobs to survive, and to keep an eye out for better opportunities in the future.

Wishing the best of luck to Ainxang and all other job seekers!

Employer Shocked At Job Seeker’s Rude Reply, But Is He Totally At Fault?

M’sians PM for job openings with emojis and no manners