Although the giant snake was a frightening sight, netizens were in awe of the snake’s beautiful colours and supermodel pose. 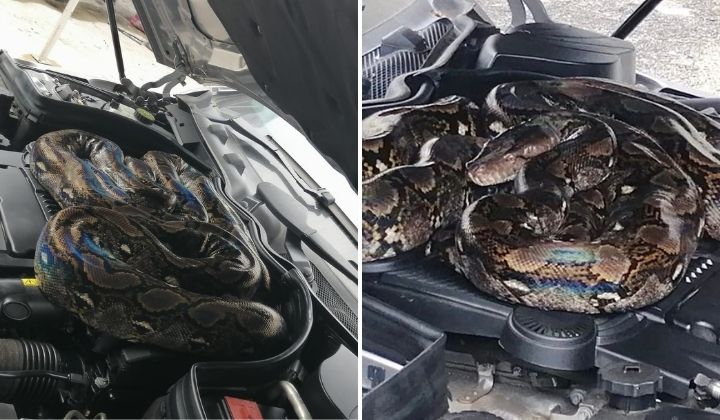 Snakes, big or small, scare a lot of people easily because they’re highly likely to be venomous.

Imagine Twitter user Sya’s shock when she found out her uncle’s car became a hangout spot for a giant snake.

Her uncle sent his car to a workshop in Nilai today, 21 April. When the front hood was lifted, they were greeted by a giant snake happily curled up on the warm, toasty engine.

Since no one could speak in Parseltongue, the Civil Defence Department (JPAM) was called in to remove the snake but the task proved challenging.

The long snake simply refused to budge like a child refusing to get out of bed for school.

update: the struggle is real pic.twitter.com/bVTijr3enn

Although it was a frightening sight, Sya voiced her admiration for the snake posing like a model on the car engine.

Where did the snake come from?

Sya told TRP that her uncle left his car overnight at the roadside near Mesa Mall in Nilai because there was a problem with the wheel sensors. This must be when the snake decided to slither into the car.

The car was only towed to the workshop the next morning and that was when they discovered the snake.

Netizens pointed out the snake’s beautiful skin pattern and colour. Some of them even jokingly asked the snake for skin care tips to achieve a beautiful ‘glow.’

The snake was also given stamps of approval for choosing a good car to lounge on.

For those who are curious, a netizen shared that the snake is a reticulated python. It’s said that pythons love warm and hidden areas so that was why it hid under the hood where the engine is.