Netizens believe the police followed the convoy closely to make sure the students were safe. 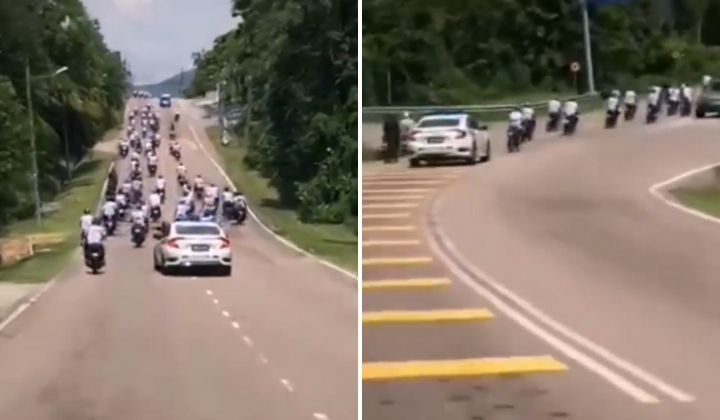 Most high school students are known to celebrate the end of their exams, especially the Sijil Pelajaran Malaysia (SPM) examinations, in a big way.

However, some of these celebrations can get too far and the students get into trouble with the authorities.

Previously, a group of boys was caught on video unleashing fire extinguishers in the school canteen after their exams.

Kosmo reported that a group of students in Kluang, Johor, decided to mark the end of their SPM exams with a motorcycle convoy recently.

A video of their adventurous road trip was posted in the Facebook group Aku Budak Kluang. There were about 40 students, who are still in their school uniforms, riding their motorcycles in a group.

The large group were quickly tailed by the police in a patrol car. While some of the students broke away from the group, the rest remained unfazed by the presence of the police and continued speeding down the road.

Others reminisced the time when they were younger and freer. They advised the students to enjoy their lives to the fullest now because they’ll soon have to grow up and work hard.

The netizens also wished the students the best of luck in their lives and to make great high school memories.

It’s not all fun and games

Despite the excitement of it all, the authorities did not take the matter lightly. According to Kosmo, the police have identified some students involved in the motorcycle convoy.

The case will be investigated under Section 42 (1) of the Road Transport Act 1987 for driving recklessly and dangerously.

Preschool Teacher Says Constantly Crying 5YO Boy Is Not School-Ready, Gets Criticised By Netizens