The woman shared that she only took food to feed her starving children. 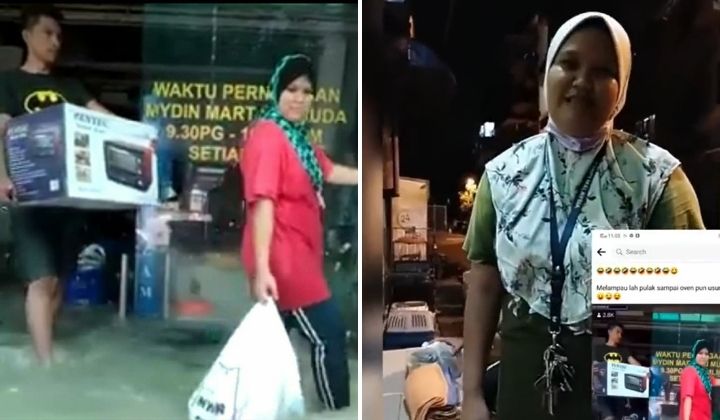 The managing director of Mydin Hypermarket pardoned the people who had to loot his store in Taman Sri Muda, Shah Alam in order to survive in the flood on 23 December.

A few days after his official statement, a viral video showed a man and a woman exiting the same Mydin store with a cardboard box that showed a picture of an oven on the outside.

They were quickly made fun of by netizens online simply because the man carrying the box was wearing a Batman shirt too.

A netizen said that maybe Batman needed the oven to make brownies and make ends meet.

Nevertheless, the woman in the video has come forth to explain herself in a video posted to Twitter.

The woman denied that she took an oven from Mydin. She said she used the huge box to carry food such as biscuits and supplies to feed her hungry children at home.

She added that her children had not eaten for three days so there was no point bringing an oven home instead of food.

The woman also apologized for the misunderstanding she caused that day. She has made a police report to clarify matters too.

At the end of everything, there is always two sides of a story. https://t.co/y4hKc9AddI

Some netizens reminded others to give people the benefit of doubt and let the issue rest.

The fact that the woman had to make a video to explain herself showed us that we shouldn’t be too quick to judge another person’s actions especially in desperate times.