The clip showed a sea of garbage. All around. Garbage everywhere. 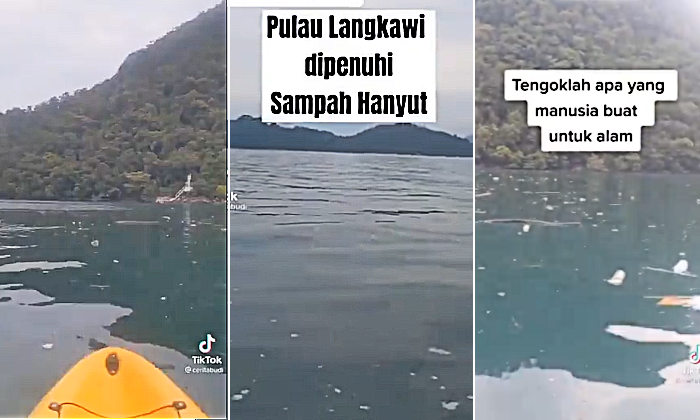 MPLBP President Radzuan Osman explained that the floating garbage seen in the island’s waters had been washed out to the ocean by high tides and the monsoon season.

He was quoted saying that the ocean tides can reach villages located in Bukit Malut and drag trash that had been previously disposed of by residents into the sea.

He also said that part of the pollution had come from neighbouring countries – evident from the labels and branding on the rubbish.

He added that the scene had shown the island in a bad light, especially considering it being Malaysia’s premier domestic ‘tourism bubble’ destination.

However, he said the MPLBP will immediately get to work on cleaning the gross garbage patch.

Footage of the Langkawi’s garbage patch had of course raised public concerns.

The 40-ish-second video saw a local kayaker paddling through an obstacle course made of plastic bottles and other debris while pointing out to several of the island’s landmarks that are supposedly close to where the rubbish was seen floating, which included, the village of Bukit Malut, the Kuah Jetty, the Westin Langkawi Resort and Spa, and the St. Regis Hotel.

Located some 20 kilometres away from the island’s capital of Kuah, the village of Bukit Malut has been a subject of national interest for quite some time.

The village is believed to be home to a community of some 8,000 to 10,000 residents. The area is also the site of the Bukit Malut Mangrove Forest Reserve – an important national ecological landmark.

Bukit Malut’s community has been regarded by some as an illegal settlement that popped up on the island sometime in the early 80s’.

Parts of the village were reported to be in deplorable condition and lacking in basic infrastructure. Berita Harian had even compared the settlement to the slums in Brazil and Mexico.

It is said that the people of Bukit Malut are made up of mostly Malay-Myanmar residents, though the rumour is that the community there were also made up of undocumented refugees from the Rohingya

Reportedly some of the residents there are noted to be United Nations High Commissioner for Refugees (UNHCR) cardholders.

However, Langkawi Member of Parliament (MP) Tun Dr Mahathir Mohammad had previously stressed that the people living in Bukit Malut were not “new” residents, but instead, the “original” residents of the island; locals who had migrated to Thailand and Myanmar before returning to Langkawi.

Dr Mahathir shared that 80% of the residents there were fishermen who supply their catch not only to the island but as far as Kelantan.

Most recently, the Kedah State Government announced plans to relocate Bukit Malut’s residents to other parts of the island within the next five years.

The area would instead be replaced with tourism projects – with plans to build a racing circuit, fancy resorts and hotels as well as posh condos and villas in the area.

Kedah Menteri Besar Muhammad Sanusi Md Nor said that he envisions the island’s racing circuit to be the “Nurburgring of the East” and place Langkawi on Asia’s motorsports map.