Her comments were so tasteless her mask ran away. 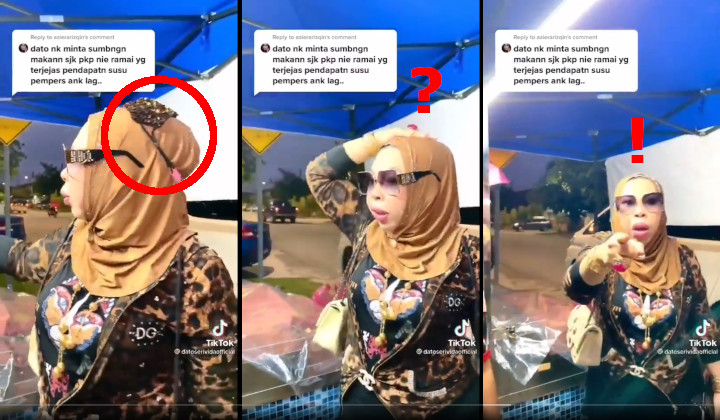 In reply to a comment asking for food aid, cosmetic millionaire Datuk Seri Hasmiza Othman (aka Datuk Seri Vida or DSV) shot a video belittling those who wave the #BenderaPutih.

Not only that, but did so while not following the SOP and wearing her mask on her hair-bun instead of her face.

READ MORE: “Bendera Putih” Movement Going Viral As Malaysians Try To Reach To Those In Need

The commentator asks: “Datuk, I would like to ask for food donations. Since the MCO, many have had their incomes affected. And we need money to buy milk and diapers for our babies.”

In response, DSV shot a video and began by telling the mother in her comment that MCO is not an excuse not to make money to buy milk and diapers for her baby.

She then proceeds to talk to a man who has been selling food in front of his home for the past year and makes about RM200 to RM250 a day.

“As long as you have the will and put an effort into it,” says DSV before praising the cleanliness of the stall.

“Put an effort into it. Don’t be lazy and expect help from waiving the #BenderaPutih,” she added while shooing the audience away.

Where is your mask, woman?

While, the stall owner and his wife had the sense to wear face coverings and keep their physical distance following the SOP, DSV did not.

Her matching leopard print mask can be seen wrapped around the bun of her hair, early in the video and disappeared soon after.

As the white flag movement is a “by Malaysians for Malaysians” movement done in the spirit of #KitaJagaKita, no one took kindly to DVS’s comments.

One commenter began by pointing out that her own father worked hard for the family and reminded DSV not to belittle the poor.

Another said that DSV is living in her own delusions.

One even call for the police to issue a compound to DSV for not wearing a mask in a public space.

If you want to be better than DSV and help those in need or in need of aid yourself, we have written a guide that may help you.

READ MORE: Want To Get Or Give #BenderaPutih Aid? Check Here