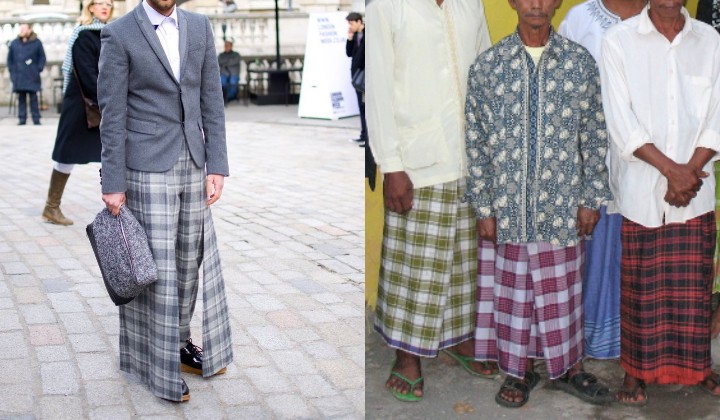 Somehow I knew the day would come when the kain pelikat would take its rightful place in the halls of fashion.

While I agree with her that they are not kilts, I might not agree with her label and grouping of them under “skirts” when she clearly means kain pelikat.

Nevertheless, to her credit Tashjian does point out that men have been wearing such things for years and some designers have included them as staples in their designs.

She also lauds the benefits of wearing kain, saying they are “the missing link between the swishiest basketball short and the liberating expanse of a ballgown”.

Here, she is absolutely right.

As any Malay man will tell you, the kain is the epitome of male comfort and masculinity, allowing a gentle breeze to caress his lychees or rambutans as he walks to the mosque on even on the warmest and most humid of nights.

Indeed it is a travesty that the kain is largely restricted to home wear or at most, to the mosque, among modern urban Malaysians.

Perhaps because its usually worn out mainly by those living in kampungs, we felt that it was somehow inferior to the Western pant?

However, it appears that times are changing as even professional a NBA player such as Utah Jazz’s Jordon Taylor Clarkson is going out and about in a kain.

Clarkson may have inherited the kain from his family as he is a Filipino-American and such use and style of kain is commonly found in Southeast Asia, possibly originating from South Asia.

However, it’s also similarly applied on the African Continent and the Arabian Peninsular.

Whatever the origins, as we laud the New York fashion for finally catching up, we Malaysians should take more pride in our own culture and fashion, and accept the wearing of kain in more situations, such as at the office (please? I really want to).

Provided we remember of course how easy it is, especially for those new to it, for the kain to catch and slip off, or its penchant for coming loose just as we have our hands full.