After a year of delays, 2021 brings a fantastic line-up of new movie releases. 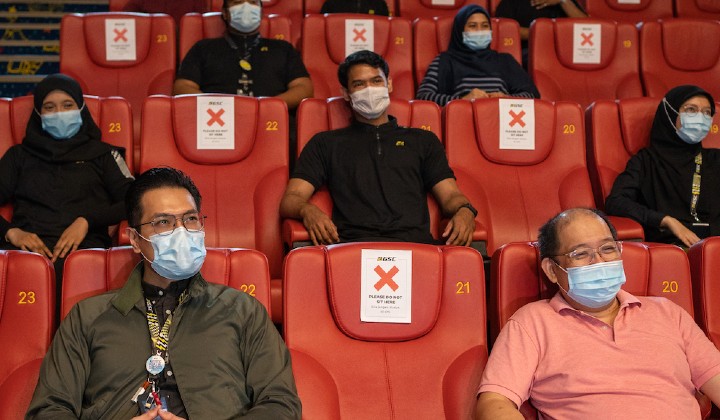 2020 was, rather simply put, not a good year for movies. Cinemas were shut down to comply with SOPs, movies slotted to release were postponed or went straight to streams, and even filming for sme movies were delayed.

Many people, even regular cinephiles, didn’t even step foot into a cinema the whole of 2020. However, 2021 is set to change all that.

There are a good number of movie line-ups for the new year, and it looks good. Most titles were highly-anticipated movies from 2020, but the pandemic has caused them to be delayed for more than a year due to the closure of cinemas globally.

Here are some of our favourites:

The highly-anticipated Demon Slayer movie was originally slated to premiere in Malaysia on 16 October 2020. Since cinemas were not allowed to operate during that time, GSC will be releasing the movie for fans on 9th and 10th of January instead.

Yes, you read that right. The old-school cartoon Tom & Jerry will hit the big screen together with Chloë Grace Moretz and other well-known stars in a live-action and computer-animated mashup comedy film. The movie was intended to be released on 23 December 2020, but will now be shown on 11 February 2021.

Raya and the Last Dragon

Raya and the Last Dragon is one of Disney’s first forays into a titular Southeast Asian-inspired movie, written by a Malaysian screenwriter, who also wrote for Crazy Rich Asians! It also stars popular Asian actresses such as Kelly Tran and Awkwafina. It was originally slated to premiere on 25 November 2020.

The prequel to the popular Kingsman: The Secret Service movie, The King’s Man tells the story of how the spy agency was founded in the first place. It was originally scheduled to be released on 18 September 2020, but after numerous delays due to the pandemic, will now be released on 12 March 2021.

No Time To Die

The 25th instalment of the James Bond film series features Daniel Craig in his fifth and final James Bond film. It was originally scheduled to be released in March 2020, but the premiere and all promotional tours were cancelled as fears of the pandemic reached its height. It has now been rescheduled to be released on 2 April 2021, a full year later.

The sequel to sleeper hit A Quiet Place (2018), which made us all scared to make sounds, already had its world premiere in New York City on 8 March 2020. More than a year later, it will hit our screens on 23 April 2021.

The highly-anticipated solo film featuring Scarlett Johansson as titular character Black Widow is meant to kickstart phase four of the Marvel Cinematic Universe. While originally slated for release in May 2020, fans had to wait a year for the new release date of 7 May 2021.

Ryan Reynolds plays a background character in an open-world video game who gains sentience in this fourth-wall-breaking action comedy. Originally slated for 11 December 2020, it will now grace our screens on 21 May 2021.

The ninth installment of the Fast & Furious franchise had run out of creative ways to name their movies after numbers and was delayed a full year from their original release date of 22 May 2020. F9 will be released on 28 May 2021.

The Conjuring: The Devil Made Me Do It

The Conjuring: The Devil Made Me Do It is the eight installment in The Conjuring franchise, but is more commonly known as The Conjuring III. While originally scheduled for release on 11 September 2020, it has been delayed until 4 June 2021. Looks like even the Devil’s been affected by the pandemic.

Venom: Let There Be Carnage

The sequel to Sony’s surprisingly good Venom was originally planned for release in October 2020. It has since been rescheduled for release on 25 June 2021.

Minions: The Rise of Gru

Parents, take heed: a new Minions movie is rolling into town. The yellow bug-eyed minions will be back on 2 July 2021, after being delayed a full year from their original release date in July 2020.

Shang-Chi and the Legend of the Ten Rings

Shang-Chi, played by popular Asian-American actor Simu Liu, will make his official introduction into the Marvel Cinematic Universe on 9 July 2021. Shang-Chi was originally scheduled to be released on 12 February 2021 to match up with this year’s Chinese New Year celebrations, but was pushed back to allow Black Widow to open up the MCU for their fourth phase.

In this sequel to the action comedy film The Hitman’s Bodyguard, Ryan Reynolds and Samuel L. Jackson will once again reunite to cause havoc. The original release date was 20 August 2021, but it has since been delayed until 28 August 2020.

Death On The Nile

Yet another Agatha Christie book-turned-movie, Death On The Nile is a follow-up to Murder On The Orient Express (2017). It was originally meant to be released in December 2020, but will now be released 17 September 2021.

Dune is a film adaptation from the scifi book of the same name, originally slated for release in late 2020. However, the underwhelming performance of Tenet at the box office during the pandemic had Warner Bros. think twice. Dune will be released 1 October 2021.

Tom Cruise is gracing the big screen again as Ethan Hunt. While we were originally supposed to see him on 23 July 2021, the film has been postponed until 19 November 2021. Still, not too bad of a delay.

Yes, you read that right. 17 years after the last Matrix films in 2003, the franchise is back for a final bang in 2020 with the original cast. The Matrix 4 was originally meant to stream into our consciousness on 21 May 2021, but now we’ll have to wait a little more until 22 December 2021.

Will You Wear A Mask If It’s No Longer Required To Do So? M’sians Have Their Say