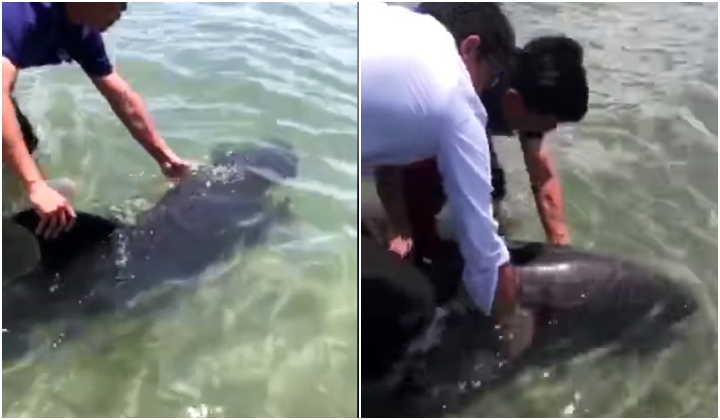 A group of environmentally-responsible teachers in Lahad Datu, Sabah have saved a stranded dolphin spotted in the sea near their school. A video of the effort was uploaded to Facebook, where it gained around 3.4K likes.

The dolphin was reportedly spotted by a teacher of Sekolah Kebangsaan Bangingod, who found the sea mammal stranded in shallow water and in weak condition.

In the video, two teachers can be seen leading the dolphin to deeper water while the dolphin remains motionless. They attempt to release the animal a few times. However, when the dolphin doesn’t take, they continue to lead further out to sea.

Malay Mail reported that according to the school’s senior assistant Yandy Merika, the dolphin was found at Pantai Bangingod, which is located near the school.

Yandy explained that four teachers helped remove the dolphin from the shallow water and the entire operation took about 15 minutes. After which, the dolphin regained its energy and started swimming around the area.

Speaking to Malay Mail, District Wildlife Department officer Sylvester Saimin said the dolphin was spotted around 9.30am on Monday, 7 September. Upon receiving a report of the incident, a team was sent to the location.

He said the dolphin is believed to be a Common Bottlenose Dolphin based on the photo, size, and description of the dolphin given by eye-witnesses.

Following the upload of a post about the dolphin online, the department immediately retrieved information and deployed a team to the location. Upon arrival at the location, the team made sure that the dolphin was in open water and not approaching the shore.

Once the team confirmed that the dolphin was back in the ocean and no longer in danger, the team ended their operation around 11am.

Kudos to the teachers for saving that dolphin! We’re sure the entire school is very proud of them.