When life gives you lemons, make lemonade – but fancy. 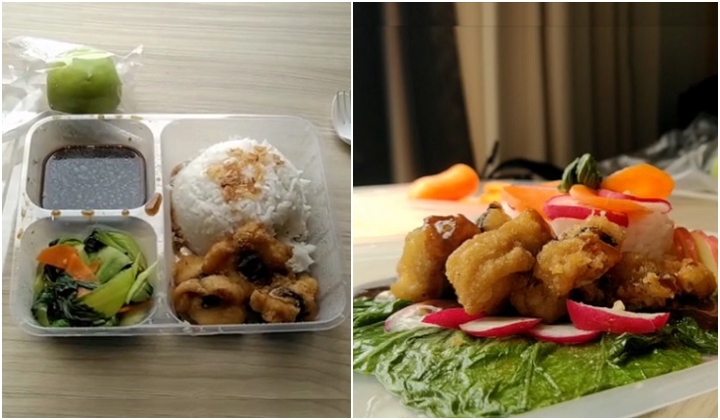 If there’s one thing most Persons Under Quarantine (PUS) can agree on, it’s that mandatory quarantine is not easy, nor is it fun.

But one particularly creative Malaysian “chef” in a Kuala Lumpur hotel has managed to upgrade his quarantine into a luxury experience by transforming his meals into, well, gourmet dishes.

Meet Terry K, aka Terry Cooks, whose YouTube video documenting his gourmet plating of unassuming local dishes has garnered quite a bit of attention online.

In the 3-minute video titled “A Chef Bored in Hotel Quarantine 2020”, Terry is seen transforming generic plates of nasi lemak, ayam masak merah and the standard set of rice, chicken and veggies into something that would even make Gordon Ramsey shed a tear of joy.

While Terry names boredom as the source of this appetising creativity, he tells TRP that he decided to make this video in a bid to cheer up the other PUS under quarantine with him at the hotel.

It started off just for fun, the food was tasty but it really looked like boring, unappealing cafeteria food. But after posting it on my Instagram Stories and seeing how my friends interacted, I realised that a lot of people find this entertaining. So, I thought, maybe I should compile the shots and make something out of this – it would be nice to make someone’s day.

And so, the 28-year-old released a visual compendium of his “gourmet makes” quarantine meals onto YouTube. Then, he shared it into the WhatsApp group with all those in quarantine at that hotel and the magic began!

The whole energy of the group changed just like that! Earlier, there were a lot of complaints, pedantic comments and overall pretty cheerless. But when the video entered the picture, everyone got excited and you know, felt better about the circumstances.

From there, the video spread onto social media, bringing the cheer along with it.

In the “Malaysia Quarantine Support Group (MQSG)” on Facebook, the post is flooded with scores of comments by highly entertained Malaysians along with Terry joining in the fun.

“I honestly love the positive comments,” says Terry, telling us that his particular favourite was someone who exclaimed “wah, everyday rice ah” – which he finds oddly amusing.

Though no negative comments are yet to be seen, he’s anticipating them appearing soon because, as he cheekily declares, “that’s when you know you’ve made it.”

Honestly, there’s little to hate because the amount of creativity displayed is pretty astounding.

He fashioned moulds using cut up plastic bottles and cups, and though he did have a bush knife on hand with some fresh vegetables sent over by his mother, it was all about letting his imagination take over.

I had a lot of fun because I really had to get creative. I didn’t really have a strategy, I just looked at what I got and experimented. I can’t really say if there is a favourite dish – all my babies are one and the same.

Here’s the plot twist though, Terry is not actually a chef.

Though trained in hotel management at the distinguished Les Roches Global Hospitality Management in Switzerland, Terry’s only “professional” experience in the kitchen are brief stints as a line cook in a restaurant chain in Subang and making omelettes at a luxury hotel in Portugal.

He actually spends his days as an outdoor instructor in various countries, taking school students and young adults on hikes, jungle trekking and all sorts of outdoor adventures.

But everything changed when the Fire Nation attacked pandemic hit.

Stuck in Australia with scant to do, the young man and his host family – the Friedrichs- found themselves hooked on the latest season of the MasterChef Australia cooking competition.

Before long, they were having friendly cooking competitions of their own and that’s when Terry found a new love.

Cooking is a rewarding, meditative experience. Once you get in that zone, you don’t really think of anything else and all your senses – all your love go into what you’re making. It’s your energy and share it with everyone, you know. Good food makes people happy.

And he brought that love with him when he returned to Malaysia in late July with his gourmet quarantine meals spreading more joy.

Now, fresh out of the two-week quarantine, Terry hopes to ride on this wave and make more creative videos focused on beautifying and elevating food with a theme of “uncovering the chef within you.”

We all know that Malaysians are amazing cooks, but I want to encourage our local talents to look at food differently – contemplate on it and you know, just play with your food!