There are safer ways to be closer to God. 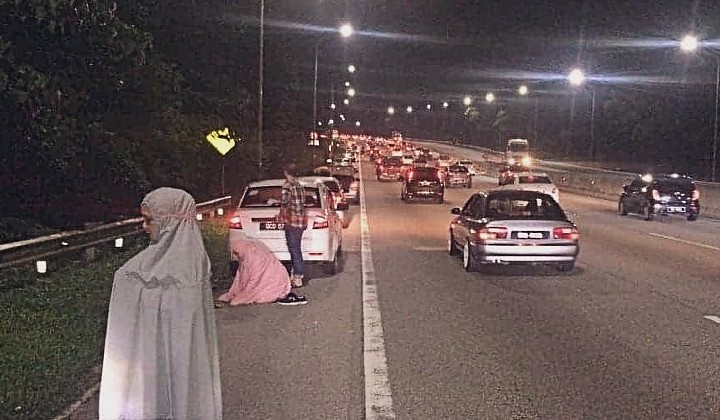 The Kuala Lumpur-Karak Expressway issued an advisory to the public to stay off its emergency lanes.

Following viral reports of Muslim travelers stopping by the side of the road to pray during the recent Hari Raya Aidiladha, balik kampung exodus, highway authorities are reminding people to not do so for obvious safety reasons.

Social media was recently abuzz with people weighing in on viral pictures which apparently showed a long line of Muslim motorists stopping their vehicles by the highway to perform their Subuh (dawn) prayers.

Malaysians would note that the country’s highways are known for its fabled traffic jams during the festive seasons that would set back one’s normal travel time by several hours, even days.

The situation is more or less the same for the country’s many rest and recreation (R&R) stops along the highways which would be crowded with people, especially with the current Covid-19 guidelines set in place during the Recovery Movement Control Order (RMCO) to maintain public safety.

As usual, netizens came racing in to provide their views on the matter.

There were those who were at awe by the situation, relating it to scenes of Muslims in other countries.

While some took to view such an event as, in part, a normal occurrence to those who are accustomed to traveling towards the north and east coasts of the country, others were of the opinion that it was something that should not be made a habit.

Wait. My question for you, do you know how very dangerous is that solat tepi highway? Boleh fikir tak?

Besides pointing out safety facts against crowding up the emergency lanes, Muslim commenters had also banded together to provide informative options for their fellow brothers and sisters on how to perform their religious obligations by either taking turns to pray inside the car while moving or to either qadha (replace), qasar (shorten), or jama (combine) the prayers that they missed.

maybe im wrong but … if surau rnr penuh bukan ke boleh solat in car ?? Cus its safe and islam doesnt want you to put your life at risk ¿?

FUN FACT: Did you know that there are ways for Muslims to pray even in the weightlessness of outer space?

All that and more can be found on the Federal Territory Mufti website.

We took the liberty of finding some useful information for our Muslim readers to check out that’ll maybe help with future travel plans, below;

So with public safety in mind, let’s all try and keep our roads and highways JUST for travelling.