The baby elephant is too cute! 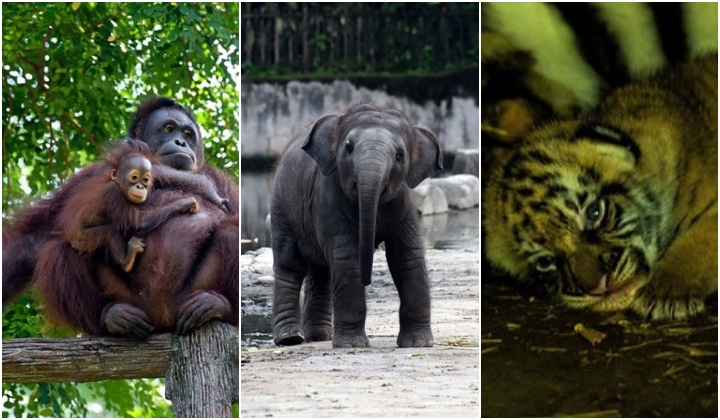 The animals at Taiping Zoo & Night Safari (ZTNS) have been pretty busy this year as the zoo announced the birth of red dhole pups, orangutan babies and tiger cubs.

Celebrating the success of their breeding and conservation programme, ZTNS shared the details and adorable pictures of all the new babies on Facebook.

Four new red dhole pups (cuon alpinus) – also known as Asiatic wild dog, whistling dog or mountain wolf – were born on 31 December 2019 at the zoo, bringing the total of red dholes at the zoo to 15.

According to Malay Mail, the pups were born to a pair of red dholes donated by Melaka Zoo in 2015.

The cubs are currently nestled with their mother in a hiding place within the display cage.

Two new Bornean orangutans (pongo pygmaeus) were born in the zoo last December and this February.

The first baby was delivered by 9-year-old Katarina while the second baby was born to 18-year-old Wasabi. Both babies are the offspring of a male orangutan named Veera who has been on loan from Singapore Zoo since March 2016.

In April, Malaysians were blessed by the utterly precious sight of three newborn Malayan tiger cubs.

The babies, born to 11-year-old Baby, are kept with their mother for 18 months as they grow and develop.

With the three new cubs, the Taiping Zoo now has 8 tigers in total.

Though born earlier in December 2018 and February 2018, the zoo has finally announced the names of the young male elephants (elephas maximus hirsutus).

Following the zoo’s tradition of naming the elephants based on the place of birth or location they were found, the first calf born to mother Taiping is named ‘Laroot’ while the second calf is named ‘Boyan’, delivered by ‘Jaya’.

With the two baby elephants, the zoo now has seven cows and three bulls.