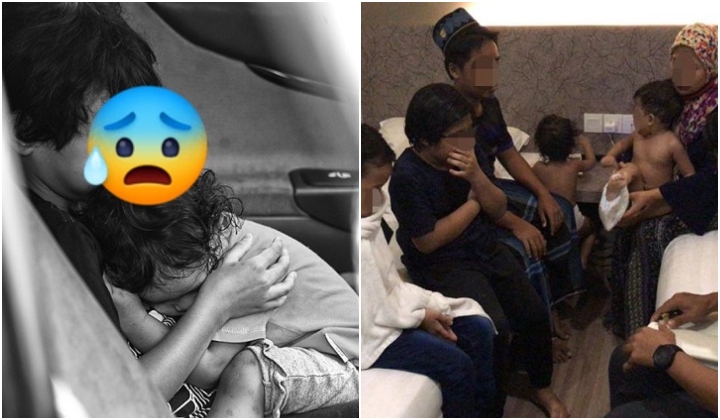 A 30-year-old mother with her 6 young children were found sleeping in a car parked at a petrol station in Rasa, Selangor.

Philanthropist Kuan Chee Heng, also known as Uncle Kentang, shared the shocking discovery on his Facebook stating that the family was forced to such living conditions after the mother was divorced by her husband during the Movement Control Order (MCO) and let go from her job as the lockdown began.

With no money to pay rent, the family was forced out of their rental house by the landlord.

The young children were aged 14, 10, 8, 3 and 2 years old along with a 5-month old baby whom Uncle Kentang revealed appeared exhausted and sweating in the car that had no air conditioning.

They’re sleeping in a car and showering at the petrol station. It’s been five nights in the car with a 5-month old baby. They look tired and troubled. No one knows how painful my heart is seeing the children in the car.

Fearing their safety, he immediately brought the family to the Rasa Police Station and notified the Selangor Zakat Board and it was revealed that the 30-year-old mother was also a cancer patient.

The Selangor Zakat Board moved swiftly, moving the family to a house and gave RM500 emergency funds while awaiting subsequent aid in the near future, which will include:

Many were also quick to notice that the mother of 6 likely had her first child at the tender age of 16.

Calculating she got pregnant at the age of 16, assuming she might be married at most a year. Ya allah, she should be focusing on studying je masa tu, spm pon tak habis. & the fact the husband is a bastard like you ruined a little girl’s future and then you dumped them like trash https://t.co/rRLdefYBL7