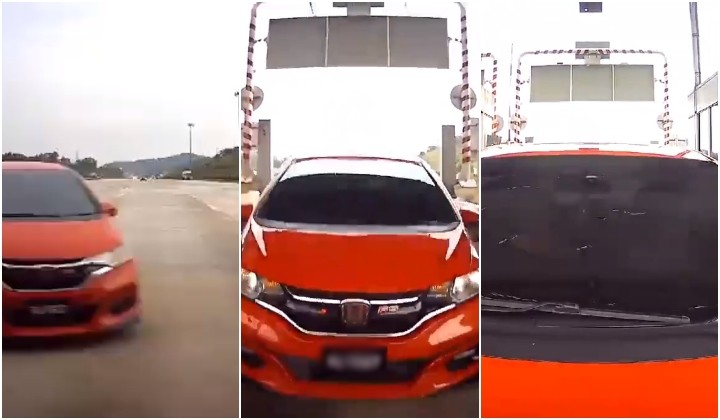 Recently, social media has been abuzz with videos of expensive cars following vehicles in front of them really closely at toll plazas so they can get through the booths before the barrier gate descends and avoid paying the toll fee.

This isnâ€™t a new phenomenon in Malaysia and weâ€™re sure that some of you have definitely heard of people doing this or at toll booths and parking ticket barriers before.

On Monday, another video of a car attempting the stunt went viral on social media. However, this time, the events that occurred were even more shocking!

In the video shared on Twitter, a red Honda Jazz can be seen switching lanes last minute to tailgate a vehicle at a toll plaza.

Luckily, the driver of the vehicle noticed the Honda Jazz. Thinking quickly, he stoped his car before going through the gate barrier. The Honda Jazz, not expecting the vehicle to stop, accidentally rear-ends him.

In a (presumed) panic, the Honda Jazz dangerously reverses out of the toll booth.

However, the Honda Jazz CLEARLY does not learn his lesson and tries to pull off the same stunt again by tailgating another car IN THE NEXT TOLLBOOTH.

The Honda Jazzâ€™s second victim was not as smart as his first, and the Honda Jazz manages to get through the barrier gate (as seen in the far left side of the screenshot below).

Social media users were understandably annoyed by the driver of the Honda Jazz for blatantly breaking the law and endangering others.

“If his girlfriend is sitting next to him in that car, I hope she knows her boyfriend is trash”

In case you were wondering, unfortunately, tailgating others to avoid paying tolls IS NOT an offence under the Road Transport Act 1987, and so traffic police cannot take any action against offenders.

Instead, it is only covered under highway regulations set by highway concessionaires who could file for the offender to pay a compound, and highlighting the incident to them could encourage them to do so.

“The Honda Jazz has a list of summonses, on top of that he doesn’t even pay toll. Please take action on him.”

HOWEVER, since in this particular case with the Honda Jazz INCLUDED A REAR-END ACCIDENT, such an accident IS AN OFFENCE under the Road Transport Act 1987!

Therefore, the driver of the Honda Jazz better watch out because the police can definitely catch them and charge them!

Watch the video of the incident below!

Access Road To KL From Kajang Toll Plaza Closed For A Month, Here’s The Alternative Routes