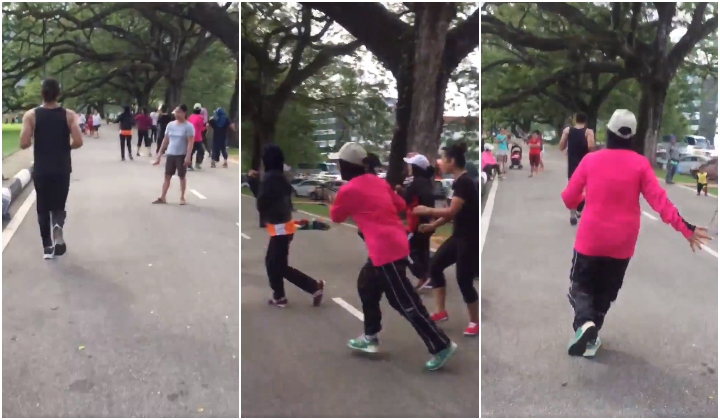 With the recent uprise of the #MeToo movement, more and more people are realising how often women face sexual harassment and the trauma it leaves behind.

Usually, men are the perpetrators of harassment, and women are the victims. However, the reality is that sexual harassment can come from anyone, even women. And when it does, itâ€™s just as bad.

Twitter user @HudzaifahAziz experienced this awful fact when he was openly cat-called by not one or two women, but a whole group of them.

In a 20-second video of the incident shared by Hudzaifah on Twitter, he can be seen jogging past a group of women doing Zumba in a park.

As he runs past them, the women cheer and one even attempts to run after him.

Based on an interview, Hudzaifah had gone jogging in Taiping Lake Garden to escape the hazy weather in KL.

The group of women had looked and smiled at him during his second lap around the lake. In order to not appear unfriendly, Hudzaifah said that he smiled back at them.

On his third lap, he could hear the group of women say â€œheâ€™s coming, heâ€™s coming, get readyâ€ as he approached them and they moved in such a way as to purposely bump into him.

The video recording he shared was of his final lap.

Obviously embarrassed and uncomfortable by the unwanted attention, Hudzaifah stopped jogging after that and went straight back to his hotel.

Responses towards Hudzaifahâ€™s video were mixed.

Many social media users stood up for him, but just as many invalidated his experience, normalised the womenâ€™s behaviour and implied that he was overreacting.

Truly disgusted by the whole thing. It is sexual harassment and I’m so sorry it happened to you. Please know it’s not your fault- everyone has a right to be safe in public.

“They’re just teasing you. The aunties and kakaks were just having fun. They didn’t even touch you right.”

It IS sexual harassment. There is nothing fun about a group of older women catcalling and chasing a man. I read your thread and I’m sorry this has happened throughout your life. Men get harassed too, but they feel too ashamed to say anything. Thanks for sharing. #MenToo

“Maybe it’s because you’re too hot”

Srsly old ladies harassing younger male/female are just as disgusting as old men do. Whoever disagree hmm check your brain pls. If you have one.

“It’s because the way you run is too cute, it’s normal to get teased. Just relax. Don’t stop running bro.”

While many might mistake the behaviour of the women as a joke, Hudzaifah definitely did not find it funny.

FYI, although sexual harassment has yet to be considered a crime in Malaysia, several countries have ruled the act of cat-calling and sexual harassment as a punishable offence. These countries include Belgium, Portugal, Argentina, Canada, New Zealand and the United States.

I was catcalled & even chased by a group of Zumba aunties and kakaks. They even took a video of me running. Might looked fun but imagine if the situation was reversed, it would be outright sexual harassment. #StoryOfMyLife 🙂 pic.twitter.com/dnBAVVtIRD