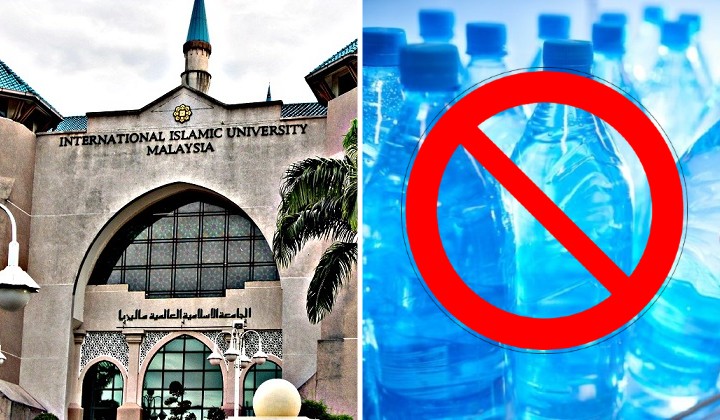 Sometimes going green might not be the most practical optionâ€¦

Its aim is to get the community to stop using single-use plastic materials like; straws, cutlery, bottles, the works…

It seems like the universityâ€™s efforts to save the planet came at the expense of its students’ convenience and well being.

Students and netizens took to social media to voice out their opinions on the ‘plastic mineral water ban’.

IIUM banning mineral water just in time for the haze season, what luck.

If youâ€™re dating an IIUM/UIA student, you are single to me.
What heâ€™s gonna do? Nothing.
Because he ainâ€™t gonna survive this hazy weather while IIUM is still banning the access of clean drinking water in the campus 😤😤

“IIUM, I know that youâ€™re banning mineral water but please provide more water cooler (machines). It’s hard having to beg around for a kettle to boil water. It’s been so long since Iâ€™ve had a cold drink.”

This is the consequences when you want to go environmental friendly without proper planning. Should have more water dispensers around the campus then progressively stop selling bottled mineral waters. Come on UIA, you dont aspect student to petition for more water dispenser?

Supposedly, students had previously expressed opposition towards the ban to UIAâ€™s Students’ Representative Council (SRC), but to no immediate effect.

Meanwhile, the SRCâ€™s official Twitter page mentioned that efforts were being made to discuss with management in finding a solution to the dilemma.

📍Few days ago (Wednesday, 4/9/2019), the Students’ Representative Council (SRC) managed to present a proposal on opposing the University’s policy on pic.twitter.com/lKNROUTLrw

📍 As a result, they ask us to help them finding a better solution and present in the next UMC meeting on 18/9/2019

📍For the time being, we are trying to find a temporary solution for the students before the next UMC meeting.

In the most recent update (during the time of writing), the ban has been temporarily lifted, allowing students to again purchase and drink bottled mineral water.

Looks like saving the planet isn’t gonna be THAT easy…

Hope the students at UIA won’t be left thirsty for too long!