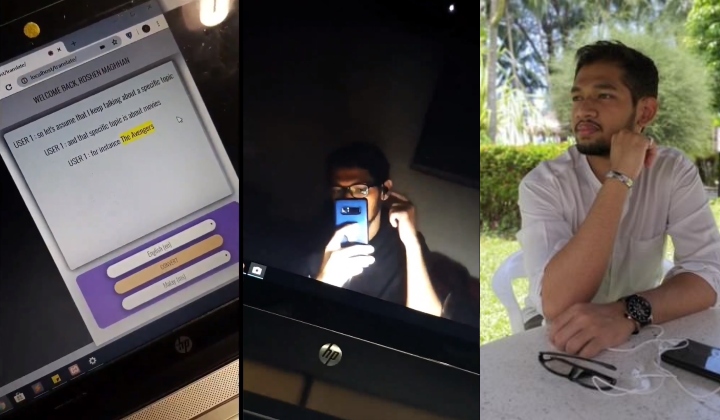 How many times have you sat down clueless in work meetings because your colleagues keep switching languages faster than Bruce Leeâ€™s punches?

Trust us, youâ€™re not alone.

Twitter user Roshen Maghan (@roshenmaghhan) also faced a similar conundrum during casual work meetings where half the time most of his colleagues would converse in Mandarin.

About 6 months ago(?) I worked at this software development company, & every morning, we’d have a casual meeting about the work, but half the time, during the meeting, most of them would converse in Mandarin, & so I’d always be pretty clueless half the time

Before we jump to conclusions, Roshen DID request that they speak in English and they DID oblige, but would eventually slip back into Mandarin. Roshen believes it’s unintentional and assures that theyâ€™re all very nice.

So, instead of complaining loudly on social media 👀, he decided to do something about it and share his solution on Twitter.

He made a real time translator!

The inspiration for this creation came from Google Pixel Buds that can convert any language in real time.

He couldnâ€™t afford the nearly RM800 price tag, so he decided to MAKE it instead!

But the thing about the pixel buds, is that they’re EXTREMELY expensive. So then just like everything else I’ve built, I decided, if I can’t afford it….I’ll build the damn thing myself pic.twitter.com/VTGkrUsBCb

First, he went to the US Federal Communications Commission (FCC) website to get the hardware breakdown.

Then, he turned his attention to the software, purchasing the API key from the developerâ€™s website.

You can get your API key at the developer’s website, and there’s a cost for it, but it’s not much, I was only charged $0.13 for a few hundred translations

So yea, now we write the code to translate our spoken text into the language we want, using the API key pic.twitter.com/WDmhLwSY67

According to Roshen, you could train an AI to do your translation, but that would take a lot of time, power and is extremely tedious. So, just use whatâ€™s already available, Google Translateâ€™s API.

In case you donâ€™t understand tech speak, API stands for Application Programming Interface. Itâ€™s the â€œgo-betweenâ€ that lets two software applications â€œtalkâ€ to each other. Weâ€™re going to leave this video below if you need a better explanation:

With his real time translator, Roshen wanted to make sure that it would work on every software platform like Android, iOS and Desktop AND with any earphone with a microphone, wireless or not.

I wanna make sure it’s able to work on every platform ( Android, IOS, Desktop ) therefore, it’ll be web-based

Also, I wanna make sure its able to work with any earphone wired or wireless, as long as it has a microphone. So here’s the earphones I’ll be using ( Left pic ) pic.twitter.com/Gbaz4XvRRs

After he got the translation done, the next step is to make sure the translated words are voiced out and the user can hear it through the earphones.

So now it can translate in any language, in real time. So it fulfills the same goal as the google pixel.

( The reason the audio is soft, is bcs its coming from the earphones )

But then I thought to myself….why stop here, when I can make it way better….. pic.twitter.com/rVfTSzIZsK

He skips over a couple of steps on his Twitter thread to spare us the confusing technical details, but he did it! A product that can translate any language in real time, similar to the Google Pixel.

Heâ€™s done it, heâ€™s fulfilled his goal. But Roshen didnâ€™t just stop there.

He thought if he could translate ALL speeches to text in real time and include voice differentiation, deaf people can also be included in a conversation. They can read the translated text as the conversation is going on and not get left out.

Now I realised what if I actually translate ALL speeches to text in real time, and implement voice diarisation to differentiate each voice?

This way, even deaf people can be involved in a convo, and will be able to read & know what the convo is about pic.twitter.com/DMoRzUBdAI

FYI, the transcript feature for the deaf uses voice recognition algorithms which he developed himself, integrated with NLU & NLG (chatbots). He also developed the voice diarization to differentiate each voice.

This fella keeps going on, adding another feature where the application checks every word in the conversation and recognises topics. If you click on the topic (itâ€™s highlighted), itâ€™ll give you a quick summary of the entire topic. Walao weyh!

Then, again, I was like why stop here….so I made it more informative, using machine learning, it checks every word in the convo, & if the word is a topic, it gets highlighted

And when u click the highlighted word, it’ll give you information about that topic pic.twitter.com/0vVBrYk6PX

However, Roshen admits that his application isnâ€™t perfect. Accuracy of voice translation is about 90% while voice diarization is about 60%.

STILL. This dude is impressive!

Now you can talk shit about me in any language and I’ll still understand, and I can finally day dream during a convo and still stay in the loop HAHA

Weâ€™re not the only one impressed, okay. His tweets have gone viral with nearly 10,000 retweets at the time of writing. Twitterjaya has lauded the man for his creative solution to an everyday Malaysian problem.

rather than complaining about the situation, great how you do something to get yourself out from the situation 👏

Teach me master!! Teach me the way of developer… Anyways, you should join a group called DEVCON based in MAGIC Cyberjaya.

Bro.. this might be the solution for my lazy ass cause I’m too lazy to learn any new language..

GURL I NEED THIS!!!!!! They always speak mandarin during meetings because one of our colleagues have poor english skills. And i always ended up almost dozing off every single time.

This isn’t Roshen’s first foray into making cool contraptions though. He’s created his own version of Google Home, made with his own AI (named Caroline) to automate objects in his home.

This year I plan on venturing into hardware even more, & bcs I can't afford a google home, I've decided to build my own one HAHA, using my A.I & an Arduino

So as of right now, it can control my fan, TV, aircond, & my house gate. Time to automate everything in my house!! pic.twitter.com/K6HRyK89Ns

AND also made an augmented reality (AR) pocket-sized project holder.

Now that I use augmented reality VERY often, especially when building something including hardware, I decided to make a pocket-sized project holder that can be visualised easily, instead of carrying a book.

So here's what we're gonna build in this thread : pic.twitter.com/weBLY7u6SL

Now, where can we buy his stuff? We have a, umâ€¦. friend who needs this.

5 Strangely-Named Malaysian Kuih You Definitely Have Never Tried Before