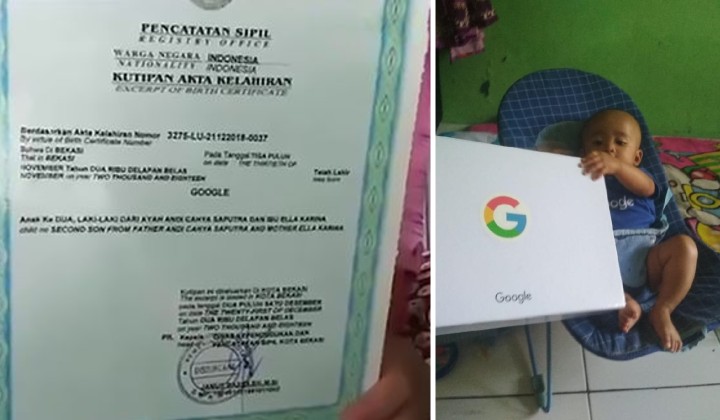 An Indonesian couple in West Java received a surprise call from a Google representative who congratulated and sent well-wishes to their 6-month-old baby Google.

Well-wishes wasnâ€™t the only thing they sent to the family.

Google had hired a taxi to personally deliver swag to the couple, who live some 1 hour away from Jakarta city centre.

Google (yes, just the one name ONLY) was born Nov 30, 2018, but had only gone viral last week when his mother shared his birth certificate on social media.

Andi Cahya Saputra and Ella Karina, parents to Google, explained that they were attracted to the meaning of Google (OK not really the mom, it was the dad).

We hope Google becomes a useful person to society

Have you seen Google Play (pun intended)? Well here’s a picture of Google playing with his grandma.

Google Indonesia on Twitter also started a quiz about #bayigoogle.

📣 Welcome to the world, #bayiGoogle! We think that is a cool name too.

Netizens now have their own plans.

So what do you want to call your unborn child?