Three police officers did all they can to save their four legged companion. 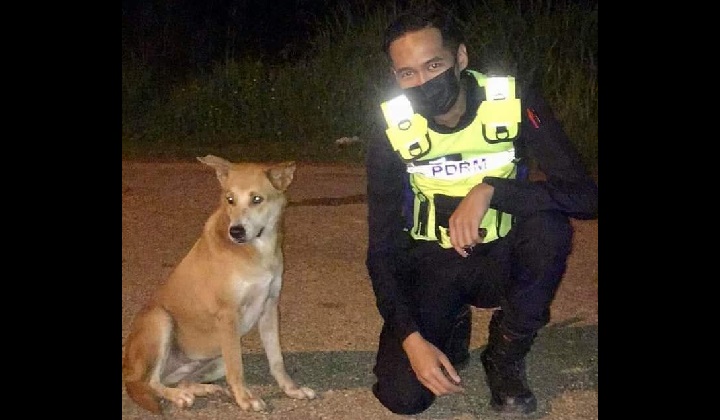 Despite the trials and tribulations of tirelessly guarding a roadblock, day in and day out for over a year, three police officers in Kota Linggi, Johor managed to make a friend. A blond-haired four-legged ‘good-boy’ they named Johnny.

Johnny’s antics, playing with the police officers in the wee hours of the morning, were recorded by activist and former policeman Kuan Chee Heng who is better known as Uncle Kentang.

In the video, Johnny can be seen running up and down the road following the police officer’s lead and comes running back when he is called.

“They were like best friends,” said Kuan in his Facebook post. After all, there’s a reason why people say a dog is a man’s best friend.

But, tragedy struck on Saturday (29 May). Jonny was found with lacerations on his belly and a broken leg. They can only speculate what happened to the poor thing. Perhaps it was hit by a vehicle, or perhaps it was gored by a warthog. The roadblock was located near a palm oil plantation after all.

Without a second thought, the three police officers rushed Johnny to an animal clinic early in the morning (of 30 May). They knew the cost would not be cheap, they did not have much money, but they knew they had to do something.

“They are police officers, and they did not have enough money to pay for the care that their buddy, Johnny, needed for the serious injury on its stomach and its broken leg,” wrote Kuan in another Facebook post.

With its rear paw all wrapped up, Johnny was then taken to a veterinarian in Johor Bahru. A steel rod would be inserted in its leg to help it walk again. The cost would surely be high. In the thousands, speculated Kuan.

“The police officers are very fond of Johnny and will try to pay for Johnny’s operation and Johnny until he recovers.

“Because that’s their buddy. It didn’t matter if it was in the dead of midnight or heavy rain, Johnny would stay with them.

“The 3 policemen will pool their money to treat Johnny,” wrote Kuan.

On Sunday (31 May), the vet in Johor Bahru told Kuan and the officers to take Johnny to an orthodontist, for the broken bone. The cost, estimated by the vet, could be in the realm of RM6000 and upwards.

“I said it’s ok because if we each donate RM10, we can definitely help Johnny,” wrote Kuan to his thousands of Facebook followers. They answered and the donations came pouring in.

But it was not over yet. Kuan put another call for help on his Facebook page.

“Hi, people of Johor. Help. Johnny’s initial bill is RM180 but the policeman is short of money. CAN SOMEONE HELP PAY THE RM180 PLEASE? I will pay you back.

“If you can, please go to this clinic and help pay Johnny’s treatment bill. The doctor told me to pay first,” pleaded Kuan. The vet wanted the money in cash but all the donations were in the bank.

Somehow. The three police officers pulled through for their buddy Johnny. They managed to scrape together the RM180.

“CASE CLOSED”, concluded Kuan. “Johnny’s leg will be amputated. It will cost RM3000”.

There has not been an update about the condition of Johnny since then. The money needed for his operation presumably will come from all the generous donations from Kuan’s followers.

We can only hope that three-legged Johnny will once again be able to stand tall with his three guardian police officers.