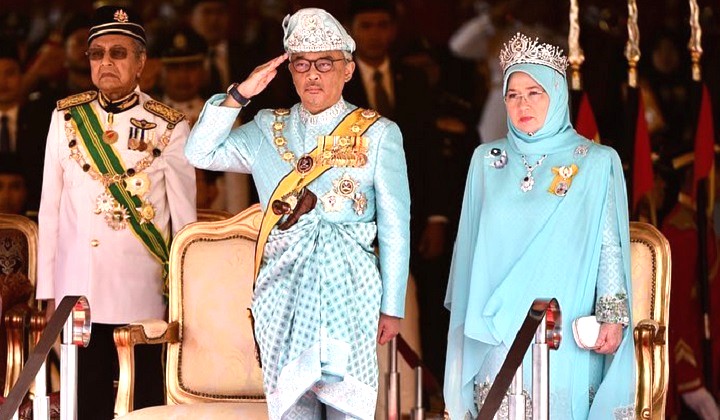 While Malaysia’s royalty shares similarities with other constitutional monarchies, it’s quite unique in the sense that the “King” or Yang Di-Pertuan Agong is a role shared by nine separate royals of the Malay states.  Not only that, the Agong is elected by the Conference of Rulers to the role and serves a 5-year term.

As the Supreme Head of the Federation, the Agong is de facto head of state as well as the commander-in-chief of the Malaysian Armed Forces.

The Federal Constitution also places the executive power of the Federal Government with the Agong. However, the monarch’s power is not absolute and can be distinguished into two categories:

Discretionary Powers of the Agong

The Agong appoints a Prime Minister who commands the confidence of a majority of Dewan Rakyat.

If no party has won a majority vote and is not bound by the decision of the outgoing Prime Minister, the Agong can choose who he ascertains has the confidence of a majority. He does not, however, have the power to dismiss the Prime Minister.

Should the Prime Minister become unacceptable, forced out by a vote of no confidence or resigns, the Agong can appoint someone else as Prime Minister or dissolve Parliament for an election.

The Agong can summon Parliament from time to time. It’s also his duty to ensure that there is no more than a 6-month gap between the last sitting of a session and the first sitting of the next session.

He can also prorogue Parliament, which means that he can stop the activities of Parliament for a period of time without dissolving it.

The Agong can dissolve the Parliament only at the request of the Prime Minister. However, he can withhold his consent to the request.

The legislative authority of the nation lies in Parliament, which consists of the Agong, Dewan Negara and Dewan Rakyat.

As part of this trinity, he can reject any new laws or amendments to existing laws. However, Article 66 states that even if the Agong withholds his permission, it will automatically become law after 30 days of submission to him.

Besides that, the Agong also has the power to keep and use the Public Seal of the Federation. This Public Seal is used for him to assent Bills passed by Dewan Rakyat and Dewan Negara to be made into law.

The Dewan Negara consists of 70 senators, where 26 are elected by state legislative assemblies. The other 44 are appointed by the Agong.

These senators he elects are those, in his opinion, who have done distinguished public service or achieved distinction in professions, commerce, industry, agriculture, cultural activities or social service.

The Agong can also choose those who are representative of racial minorities or capable of representing the interests of the aborigines as senators in Dewan Negara.

As the Ruler, the Agong has the power to pardon anyone who has committed an offence in the Federal Territories of Kuala Lumpur, Labuan and Putrajaya, as well as offences that have been tried by court-marshal.

The Agong can also pardon offences and suspend sentences imposed by any court under any law regulating Islamic religious affairs in the states of Malacca, Penang, Sabah, Sarawak and the aforementioned Federal Territories. This is because the Agong is the head of Islam in states that do not have a Ruler.

For offences carried out in states, the power to grant pardons, reprieves and respites is vested in the hands of the Ruler or Yang di-Pertua Negeri of the state.

What the Agong CANNOT do

Article 34 of the Constitution outlines the limitations of the Agong’s powers. For instance, the Agong:

As for immunity, the Agong is not liable to proceedings in any court except in the Special Court.

When the Agong is charged with an offence under any law in the Special Court, he is still the Agong but can no longer carry out the functions of the role.