Its hard for women to get the medical attention that they need because people believe that period pains are normal. 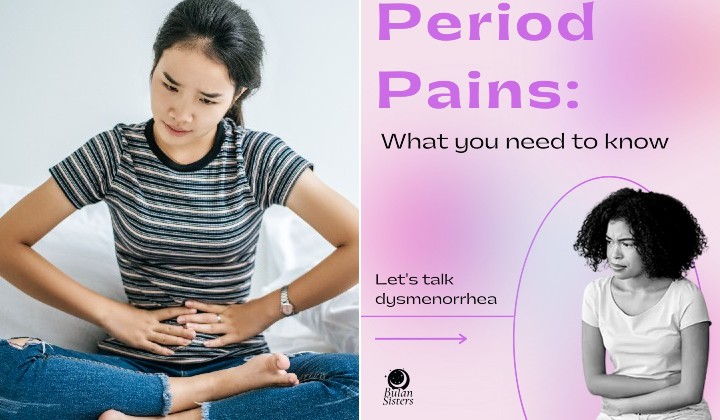 A women’s empowerment group is trying to get the word out on period pains and how important it is for people, especially men, to understand how awful of an experience it can be to bleed from the vagina every single month.

Through postings made on social media, the Bulan Sisters provided an informative summary to educate the public regarding menstruation pains or what modern medicine calls ‘dysmenorrhea’.

Women who go through dysmenorrhea experience pain in their lower abdomen or pelvis – the part in a woman’s body where the womb, ovaries, fallopian tubes and urinary bladder are located – during periods.

This pain can either be mild and might inconvenience some or be severe enough to affect a person’s ability to go about their day and make someone severely ill and debilitated.

According to the Health Ministry (KKM), one in every 10 women experience dysmenorrhea, where pains can last between 12 to 24 hours or carry on for several days.

Women who suffer from dysmenorrhea face difficulties in getting the medical attention that they need because of the stigma that period pains are normal.

What does it feel to have period pains?

Period pains can defer from one person to the next but generally, women who suffer through it will experience;

What do we need to know about period pains?

Period pains come in two forms, however, it is also possible for women to experience both forms of dysmenorrhea in their lifetimes.

Primary dysmenorrhea is an affliction that commonly affects adolescent girls or among women of reproductive age, where symptoms include cramping pains, pains in their lower abdomens that can radiate throughout their bodies and make them feel nauseated during their periods.

The cause for primary dysmenorrhea is a chemical compound called ‘prostaglandins’ that are produced by the human body. The compound is responsible for contracting the uterus to shed its lining.

Pain associated with primary dysmenorrhea is most severe during the early days of menstruation and subsides when a period ends.

Secondary dysmenorrhea can occur in women in their mid-twenties and later on in life. The pains associated with it can be similar to the symptoms of primary dysmenorrhea but more prolonged and becomes worse over time.

Women who have secondary dysmenorrhea can have irregular periods, vaginal discharge, experience pain at any time between their menses, and feel pain when they have sex or afterwards.

Secondary dysmenorrhea can also be caused by other serious medical conditions like;

It is advised for women to seek immediate medical attention if their period pains are too much to handle or when over-the-counter medications do nothing to relieve the pain.

How to cope with period pains

Women who experience dysmenorrhea are advised to;

Women are also recommended to cut down on alcohol, smoking, sugars and salts to further prevent period pains.

To stop me from further mansplaining, feel free to check out the infographics provided by Bulan Sisters on Twitter, or visit their official website (HERE) for more details on their mission to eradicate period poverty in Malaysia.

‘Aiya don’t pretend pretend la, periods where got so pain’

Well actually… painful periods are so common that there’s actually a medical term for it, ‘dysmenorrhea’. And no, dysmenorrhea does not just mean cramps. pic.twitter.com/Bza3I4FeM1