BMF said the government, banks, should be involved it this but Malaysians online are not sold on the idea. 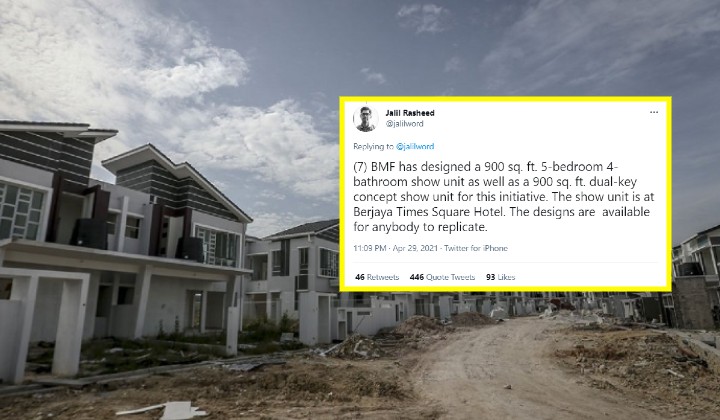 Affordable housing can be priced from RM120,000 to RM300,000 for apartments with sizes starting from 450 sq ft up to 900 sq ft in the Klang Valley, said Better Malaysian Foundation (BMF).

It’s reported by Malay Mail that the foundation has submitted the proposal to the government and is currently being studied.

Another suggestion is for the government to guarantee the home loans of B40 house buyers so that such loans can be offered at a lower interest rate, and home loan applications will be more readily approved by banks and financial institutions.

They said that this important as these loans will effectively be “double secured” over the property itself as well as by the guarantee.

(1) Affordable housing is a chronic problem globally. Much of the problem is due to pricing which does not match median income of population. pic.twitter.com/gSfH5KD2HP

BMF said that loan applications of 60% of buyers of affordable homes are rejected by banks and financial institutions due to age or poor credit scores and many first-time buyers from the B40 group are not able to pay the usual down-payment on a home purchase.

What they’re suggesting is for lenders to give 100% financing and also multi-generational loans which they say would resolve this issue.

Housing loans should also be “two-generation” loans with terms of between 40-60 years where loan repayments can be extended over two generations to ensure that monthly repayment instalments are affordable and manageable and there is still sufficient disposable income left to provide the household with a decent standard of living.

They also said that mortgages should be adjusted to make it affordable for the B40 income group.

We set out below a monthly mortgage repayment schedule showing the amounts of monthly repayments based on different amounts of housing loans taken out over a term ranging between 20 years to 60 years at an interest rate of 3% per annum with 100% financing.

People online weren’t too thrilled to see the 40 to 60 year financing term or the idea of passing down the debt on to their children.

Malaysia is becoming US junior. So many vacant buildings; old hotels, bankrupt malls etc. All can be converted into residential units for B40. But nope, we prefer to build new buildings and “allow” them to pay 600k+ over the course of 60 years for a 900sqft box. https://t.co/UZqyte8sOX

One user even pointed out that if BMF wants to solve the housing issue, they should look at other issues such as vacancy tax – a type of tax imposed on vacant and unused units which has been put on hold by the government.

The more i think about this the more i’m not a fan of the solution. If BMF is serious about addressing this they should lobbying for vacancy taxes and price ceilings. Show us the breakdown for development costs and see how much profit developers are making. Benchmark it globally https://t.co/ZnAB8Cvug7

Another user even did the math and found out the possibility of buyers having to pay double the actual property amount after multiplying the monthly loan amount.