The silver Perodua Axia was seen driving against traffic with its emergency lights on and narrowly avoiding other vehicles. 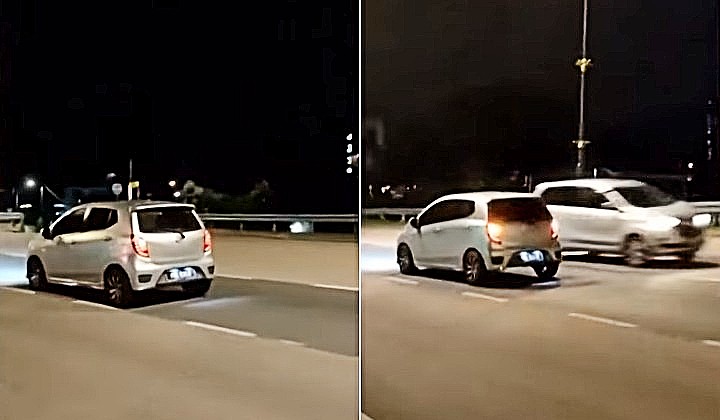 Video footage showing a traffic police officer drunk driving on the wrong side of the road sometime past midnight in Johor Bahru has gone viral.

According to Johor Police Chief Datuk Ayob Khan Mydin Pitchay, the 25-year-old officer was a member of the South Johor Bahru Traffic Investigation and Enforcement Department (JSPT) and was suspected to be drunk when he droved on the opposite side of the road near Jalan Lingkaran Dalam, Johor Bahru on 23 December.

Footage of the incident was captured by a motorist and spread quickly online. The video showed a silver Perodua Axia driving against traffic with its emergency lights on and narrowly avoiding other vehicles.

Reportedly, the drunken officer was later stopped and arrested at a nearby petrol station after the viral video and reports from the public made its way to the police station.

The case is currently being investigated under the Road Transport Act 1987 for reckless and dangerous driving.

In a statement shared on social media, Ayob Khan mentions that the officer faces between two to five years in jail as well as fines of up to RM30,000 if found guilty.

Earlier in 2020, the government introduced amendments to the Road Transport Act which came into effect on 23 October – carrying heavier penalties for those caught driving under the influence (DUI).

The new law sees DUI offences punished by a maximum prison time of between 15 to 20 years years and fines of up to RM150,000.