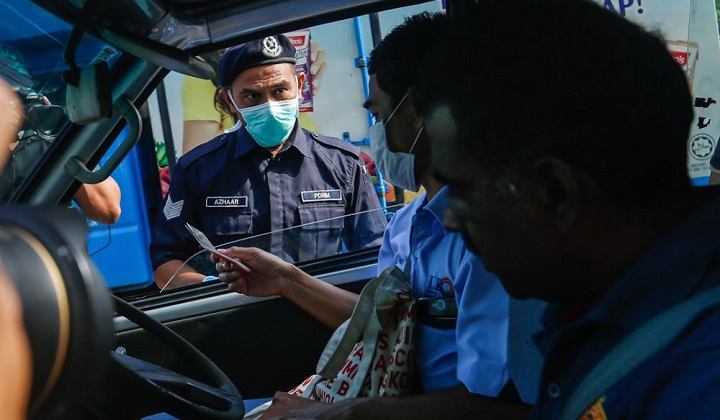 As Hari Raya Aidilfitri approaches, nearly 2,500 cars attempting to cross state lines to balik kampung were ordered to turn back by the authorities over the weekend.

To ensure that no one slips past, Bernama reports that PDRM has set up a special task force to detect individuals who travel across state lines without permission.

Inspector-General of Police Tan Sri Abdul Hamid Bador said that this task force, which includes the Malaysian Armed Forces (ATM), will also carry out surveillance in residential areas and villages across the country.

This means that those who tried to sneak back home just might get a home-visit from unamused policemen, or even the military.

He also mentions that directions have been issued to all State Police Chiefs to take action (monitoring nationwide).

PDRM has a record of who has permission for interstate travel, and who doesn’t.

At the same time, Johor police chief Datuk Ayob Khan Mydin Pitchay reminded the public that permission for interstate travel will only be given for emergency cases.

He revealed that the police received between 1,000 to 1,500 applications for interstate travel daily, and 70% are people who want to balik kampung for Aidilfitri.

Under the Conditional Movement Control Order (CMCO) interstate travel is only permitted with permission from the police.

Senior Minister (Defence) Datuk Seri Ismail Sabri Yaakob earlier warned that the police will issue compounds to those who violate the CMCO.