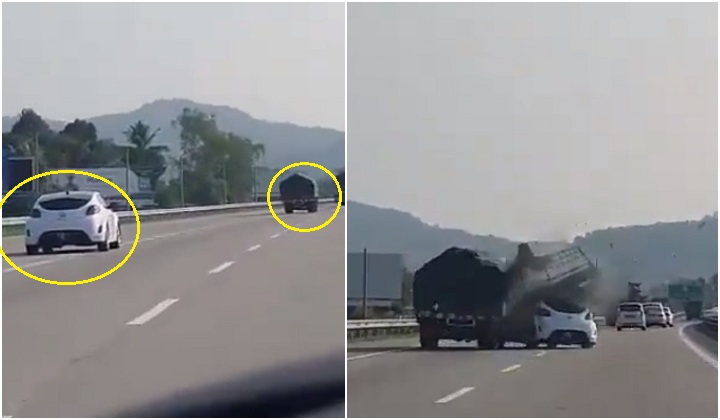 We have been warned many times to never EVER drive when
sleepy.

Unfortunately, the message seems to be lost no matter how many times it is repeated. This week we learn of the dangers of microsleep when a viral video of an accident was posted on Twitter.

The 45 second video showed a car, whoâ€™s driver seemed to be experiencing microsleep, drift across three lanes of the highway before crashing into a lorry.

While the accident was shocking, most shocking of all was how
the terrible crash could have been prevented.

With 14.8K retweets at the time of writing, netizens were
angered by the fact that the person recording the video did not honk the
sleepy driver awake.

Translation: “Did the person recording this disable the honk function? Or purposely waiting to record an accident?”

The fact that orang ni rasa to record a potential accident is more important than preventing it is making my blood boil! Eeeeee bodohnya ya Allah 😩😩😩

Translation: “The fact that this person feels that recording a potential accident is more important that preventing it is making my blood boil! Eeeeeee, so stupid!”

the person videoing is partially responsible for allowing the accident to happen in front of his eyes. Karma is always watching

Whenever you come across a driver you suspect is asleep behind
the wheel, PLEASE WAKE THEM UP BY HONKING.

Microsleep is a very real and highly dangerous threat to road users. According to Science Daily, brain regions can take short naps while youâ€™re awake, leading to errors.

Periods of microsleep are thought to be the most likely cause of people falling asleep while driving and several studies have shown that itâ€™s as dangerous as driving drunk!

As a road user, familiarise yourself with the following warning signs of an oncoming microsleep episode:

You can prevent microsleep by:

1. Interacting with other people.

2. Moving your body if possible.

Yes, just stop what youâ€™re doing and take a nap. That way
you will keep yourself and other road users safe!

Stay safe on the road, guys!

Ps: Using your phone while driving is just as dangerous ok!